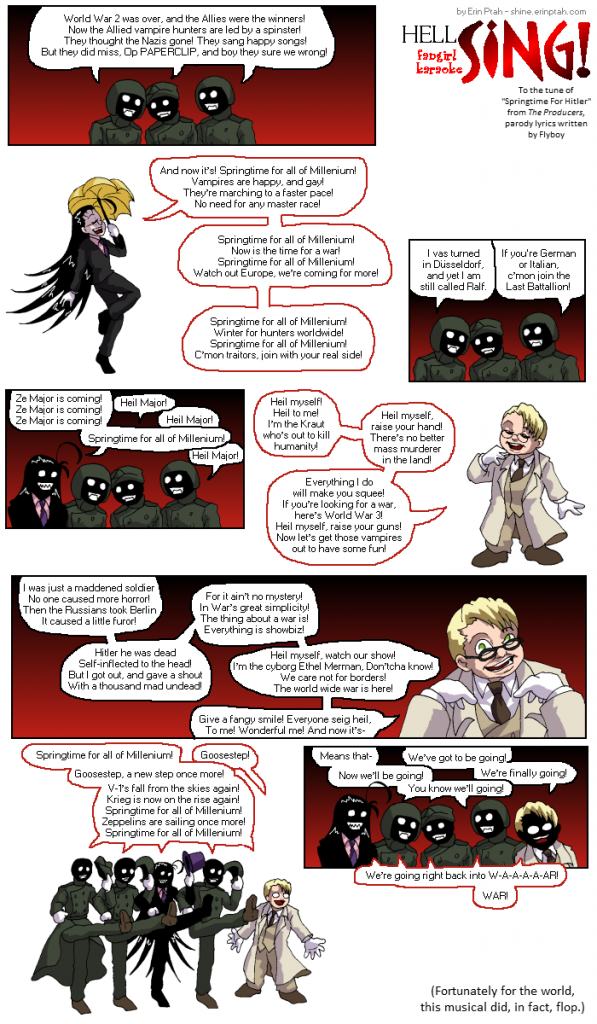 To the tune of “Springtime For Hitler” from The Producers, parody lyrics written by Flyboy.

Soldiers
World War 2 was over, and the Allies were the winners!
Now the Allied vampire hunters are led by a spinster!
They thought the Nazis gone! They sang happy songs!
But they did miss, Op PAPERCLIP, and boy they sure were wrong!

Rip
And now it’s! Springtime for all of Millennium!
Vampires are happy and gay!
They’re marching to a faster pace!
No need for any master race!

Vampire 1
I was turned in Düsseldorf,
and yet I am still called Ralf.

Major:
Heil myself! Heil to me!
I’m the Kraut who’s out to kill humanity!

Heil myself, raise your hand!
There’s no better mass murderer in the land!

Everything I do will make you squee!
If you’re looking for a war, here’s World War 3!
Heil myself, raise your guns!
Now let’s get those vampires out to have some fun!

I was just a maddened soldier
No one caused more horror!
Then the Russians took Berlin
It caused a little furor!

Hitler he was dead
Self-inflicted to the head!
But I got out, and gave a shout
With a thousand mad undead!

For it ain’t no mystery!
In War’s great simplicity!
The thing about a war is!
Everything is showbiz!

Heil myself, watch our show!
I’m the cyborg Ethel Merman, don’cha know!
We care not for borders!
The world wide war is here!

Give a fangy smile! Everyone seig heil,
To me! Wonderful me! And now it’s–

(Fortunately for the world, this musical did, in fact, flop.)