Erin: We all know what kind of “pests” they really keep under control, right…? (Ignore the lines about these pests being a problem in “sunny areas.” That’s obviously just a red herring.)

Pip (thinking): Whatever’s happening with Walter, we’ve got to get to him quickly!

Seras: What can I do? He’s too strong! It’s not like I can wipe him out with one hit!

Reseda: Are you talking to me?

Reseda: You can’t even feel it, can you?

Those crates — they’re stuffed with holy objects. Some of them silver.

Seras: Whoa. Either the third eye takes off twenty years, or —

Captain: Little girls in red are always so easy to distract.

Pip (thinking): Is it just me, or is that wolf getting bigger?

Seras: Where’s Walter? What have you done with him??

Captain: You have eyes. See for yourself.

Walter: You should run, little girl. The moment I’m free of these bonds, I will kill you.

Maggie: You d-don’t scare me!

Pip: see, now, that’s the kind of smackdown that is completely acceptable–

Captain (telepathy): Do you want to save your butler? 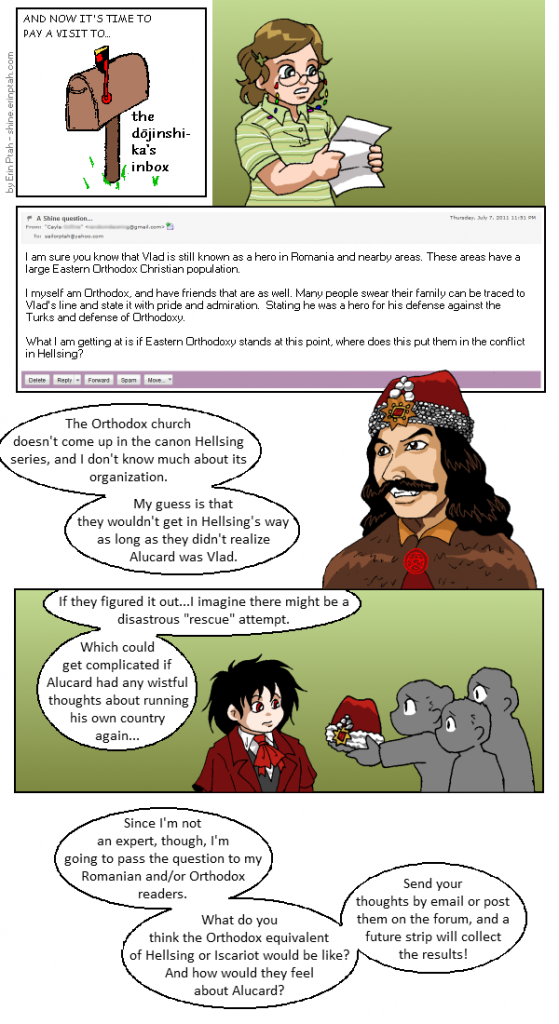 Email: I am sure you know that Vlad is still known as a hero in Romania and nearby areas. These areas have a large Eastern Orthodox Christian population.

I myself am Orthodox, and have friends that are as well. Many people swear their family can be traced to Vlad’s line and state it with pride and admiration. Stating he was a hero for his defense against the Turks and defense of Orthodoxy.

What I am getting at is if Eastern Orthodoxy stands at this point, where does this put them in the conflict in Hellsing?

Erin: The Orthodox church doesn’t come up in the canon Hellsing series, and I don’t know much about its organization. My guess is that they wouldn’t get in Hellsing’s way as long as they didn’t realize Alucard was Vlad.

If they figured it out…I imagine there might be a disastrous “rescue” attempt. Which could get complicated if Alucard had any wistful thoughts about running his own country again…

Since I’m not an expert, though, I’m going to pass the question to my Romanian and/or Orthodox readers. What do you think the Orthodox equivalent of Hellsing or Iscariot would be like? And how would they feel about Alucard? Send your thoughts by email or post them on the forum, and a future strip will collect the results!

Seras: You killed my boyfriend…you tried to massacre everyone I know…you did god-knows-what to my Master…

You might still kill my favorite woman in the world…but YOU
CAN’T
HAVE
MY
KITTY!

Pip: There’s plenty that the professionals are more qualified to handle. You have strength and speed to offer them, but don’t worry about that yet.

The war’s not over. What are the things that only you can do? The battles that will be lost if you don’t fight? Look for–