That’s a Victoria Cross being presented (secretly) to Bertie. His relationship with Jeeves was illegal in the UK at the time, and, as seen with WWII codebreaker Alan Turing, no amount of war heroism would have stopped him from being prosecuted if it had gotten out.

Walter: Jeeves was mortally wounded. We couldn’t risk him ending up in your hands. Alucard offered to turn him. Of course he refused.

I burned his body and scattered the ashes on sacred ground.

Lord Hellsing felt it would hurt morale to let the news get out. Only one other person ever knew, and he was already good at keeping secrets. 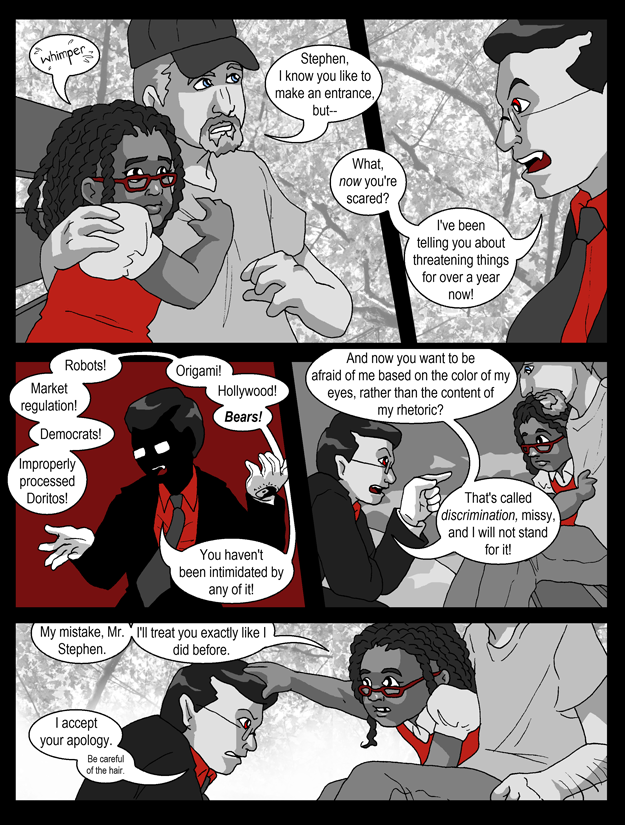 Stephen reminds Mandy exactly how seriously he ought to be treated.

Jon: Stephen, I know you like to make an entrance, but–

Stephen: What, now you’re scared? I’ve been telling you about threatening things for over a year now!

Robots! Market regulation! Democrats! Improperly processed Doritos! Origami! Hollywood! Bears! You haven’t been intimidated by any of it!

And now you want to be afraid of me based on the color of my eyes, rather than the content of my rhetoric? That’s called discrimination, missy, and I will not stand for it!

Miranda: My mistake, Mr. Stephen. I’ll treat you exactly like I did before.

Stephen: I accept your apology. (Be careful of the hair.)