That’s right, folks, this Jeeves is an I-jin. (You thought I would make the real Jeeves evil? Seriously? Come on, readers, I’m disappointed in you.)

Alucard: This just keeps getting more and more fun! Jeeves!

Alucard: No, you idiot.

Anderson: Oh. I was worried there for a second.

Alucard: No, that is clearly an I-jin of Jeeves. Totally different. 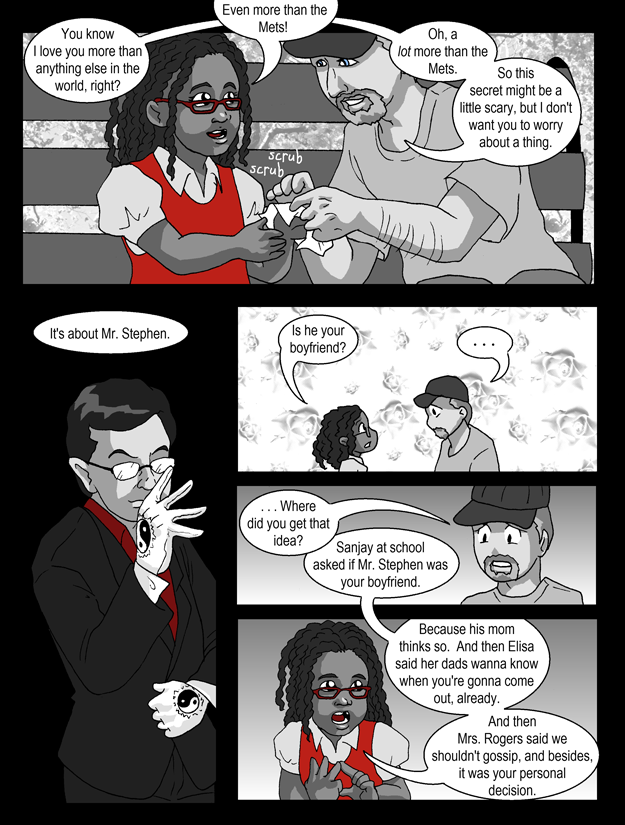 To be fair, this hypothesis is much more likely than the truth.

Jon: You know I love you more than anyone else in the world, right?

Miranda: Even more than the Mets!

Jon: Oh, a lot more than the Mets. So this secret might be a little scary, but I don’t want you to worry about a thing.

Miranda: Is he your boyfriend?

…Where did you get that idea?

Miranda: Sanjay at school asked if Mr. Stephen was your boyfriend.

Because his mom thinks so. And then Elisa said her dads wanna know when you’re gonna come out, already. And then Mr. Rogers said we shouldn’t gossip, and besides, it was your personal decision.