Integra: Take this horse and get the girl to safety.

Integra: Seras! You’re with me.

Integra: Alucard — hey! We’ll have time for more of that later!

Alucard: Sorry, Master. I’ll be up as soon as I shake these off.

Integra: If you had gotten here an hour ago, that would have been helpful.

You know you can grow your normal limbs back, right?

Seras: But the wing looks so cool! Unlike that beard.

…You have a beard.

Alucard: That’s the part she focuses on?

Integra: It is a rather ridiculous-looking beard. 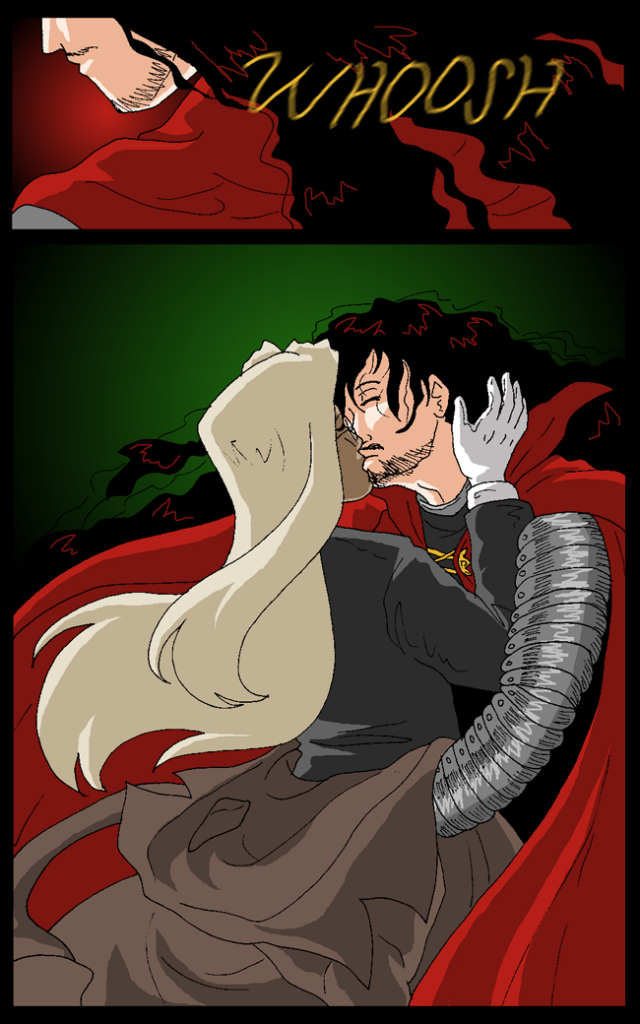 Joy to the world.

Soldiers as well as servants, enemies and friends alike…all the prince’s men, and, yes, all the prince’s horses. There’s never been a better time to use the phrase “one hell of an army.”

Maggie: I-isn’t there a route we could take that doesn’t involve over corpses?

But the army doesn’t belong to the prince these days.

Like everything else he used to own, it hasn’t been his for a very long time.

Fake Integra: That sound…what is it?

Reseda: Alucard. With what sounds like an army in tow. What did the Hellsings do to keep that power in check for so long?

Walter: So much for stranding Alucard at sea.

iJeeves: Not to worry, Butler. We have other aces up our sleeves.

Heinkel: Anderson! Do we retreat? Anderson!

Anderson: Hm…? Do what you want! I’ve got a vampire to catch!

Old-fashioned photographs were taken using glass plates treated with silver. (Some speculate that the use of silver is the reason vampires supposedly don’t appear in photographs.) Luke is in the middle of a crowd of Janissaries.

The streets of London.

Blood is the coin of life, the silver plate of memory and the soul. To drain someone’s blood is to absorb their soul into yourself.

It doesn’t matter if none of your own remains…when you have all these extra lives locked within you.

Kinda sucks for them, though.

Luke (thinking): To paraphrase my brother…what the bleep?!

Integra: Ghouls — both of you, out of the car.

Seras, aerial report. Find out exactly what we’re up against. Marian, watch my back. Alucard…