Integra: Your first mission, as a Hellsing hench-vampire in training!

Integra: We need to get to the Hellsing Mansion. The faster, the better.

Marian: Can I carry you?

Integra: Stop being ridiculous and find a house with the people inside. We’re going to commandeer a car. 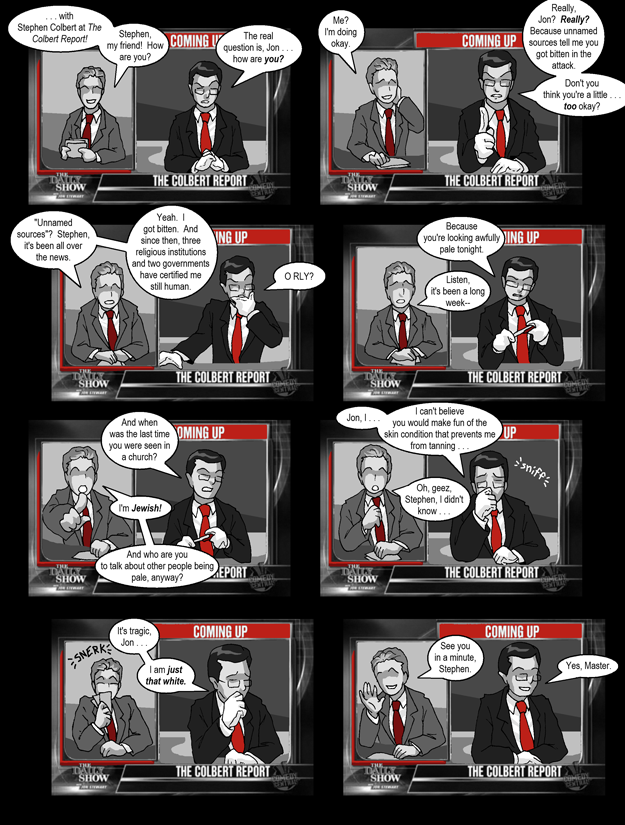 Jon: …with Stephen Colbert at The Colbert Report! Stephen, my friend! How are you?

Stephen: The real question is, Jon…how are you?

Stephen: Really, Jon? Really? Because unnamed sources tell me you got bitten in the attack. Don’t you think you’re a little…too okay?

Jon: “Unnamed sources”? Stephen, it’s been all over the news. Yeah, I got bitten. And since then, three religious institutions and two governments have certified me still human.

Stephen: And when was the last time you were seen in a church?

Jon: I’m Jewish! And who are you to talk about other people being pale, anyway?

Stephen: Jon, I…I can’t believe you would make fun of the skin condition that prevents me from tanning…
[sniff]

Jon: See you in a minute, Stephen.