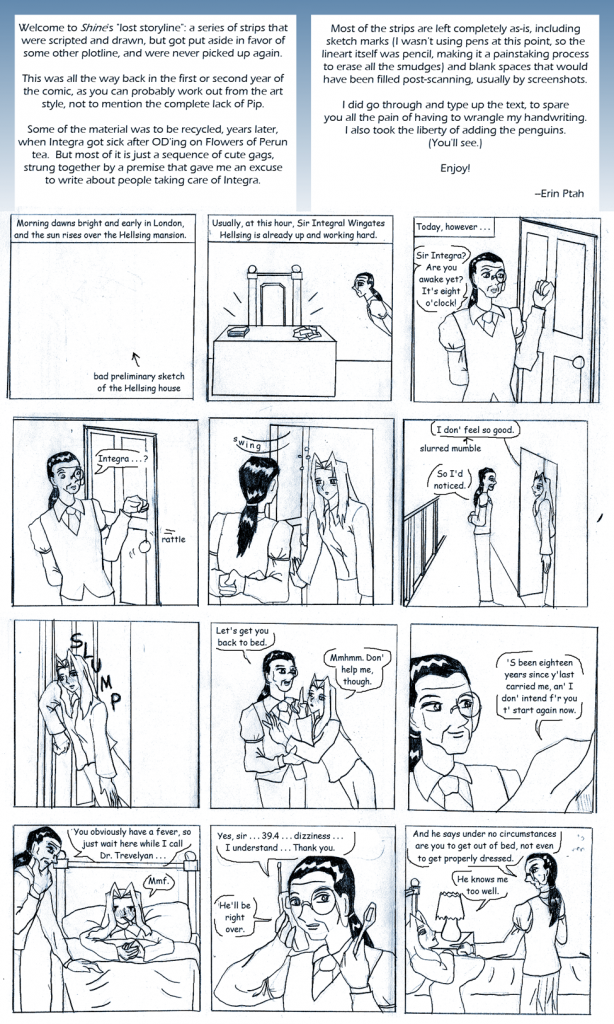 Welcome to Shine‘s “lost storyline”: a series of strips that were scripted and drawn, but got put aside in favor of some other plotline, and were never picked up again.

This was all the way back in the first or second year of the comic, as you can probably work out from the art style, not to mention the complete lack of Pip.

Some of the material was to be recycled, years later, when Integra got sick after OD’ing on Flowers of Perun tea. But most of it is just a sequence of cute gags, strung together by a premise that gave me an excuse to write about people taking care of Integra.

Most of the strips are left completely as-is, including sketch marks (I wasn’t using pens at this point, so the lineart itself was pencil, making it a painstaking process to erase all the smudges) and blank spaces that would have been filled post-scanning, usually by screenshots.

I did go through and type up the text, to spare you all the pain of having to wrangle my handwriting. I also took the liberty of adding the penguins. (You’ll see.)

Morning dawns bright and early in London, and the sun rises over the Hellsing mansion.

Walter: Sir Integra? Are you awake yet? It’s eight o’clock!

Walter: Let’s get you back to bed.

Integra: Mmhmm. Don’ help me, though.

‘S been eighteen years since y’last carried me, an’ I don’ intend f’r you t’ start again now.

Walter: You obviously have a fever, so just wait here while I call Dr. Trevelyan…

And he says under no circumstances are you to get out of bed, not even to get properly dressed.

Integra: He knows me too well.