Bertie: Reg, are you certain you can’t tempt Walter into biffing off with me back to Brinkley? This war has a way of crushing young chaps underfoot. It’s worse than aunts.

Jeeves: I’ll protect him with my life, Bertram. You know I will.

Bertie: Now I understand why Lord Hellsing’s so bally chipper all the time. If he took all his responsibilities as seriously as they deserve, he’d go mad within the week.

He seemed awfully quiet at dinner, though. What do you make of that? Time for the rest of us to start keeping an eye out for eldritch fellows on colorful steeds?

Jeeves: I would not go so far.

I suspect Lord Hellsing is merely preoccupied with the fangirl’s premonition that he would be a “good father” one day. It is a responsibility that would weigh heavily on a civilian in peacetime, and certainly no portent of the apocalypse.

Bertie: That’s your “psychology of the individual” in action, isn’t it?

Bertie: In that case…

…can you work out the p. of the Wooster i. at present?

Jeeves: I shall endeavor to give satisfaction. 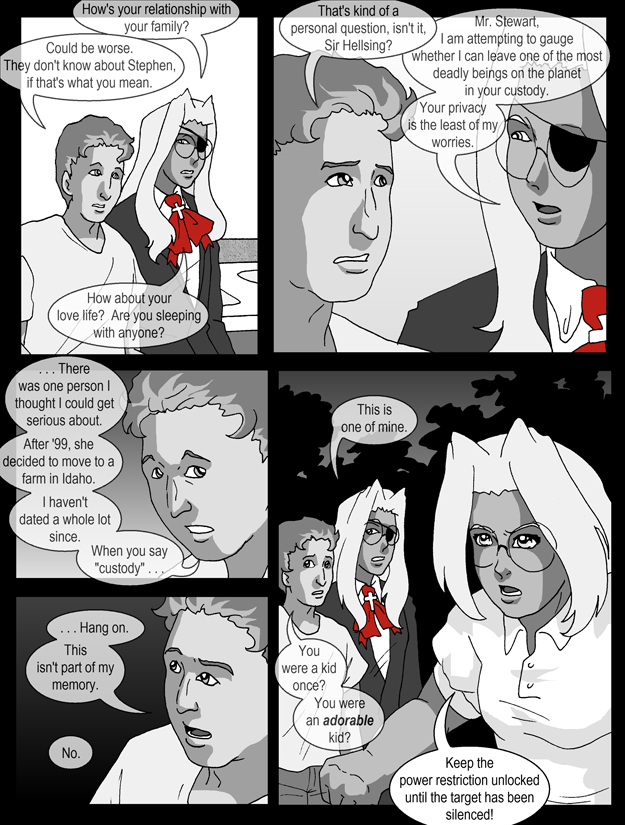 Belated nod to the fact that, yes, this is a spouse-free AU.

Integra: How’s your relationship with your family?

Jon: Could be worse. They don’t know about Stephen, if that’s what you mean.

Integra: How about your love life? Are you sleeping with anyone?

Integra: Mr. Stewart, I am attempting to gauge whether I can leave one of the most deadly beings on the planet in your custody. Your privacy is the least of my worries.

Jon: …There was one person I thought I could get serious about. After ’99, she decided to move to a farm in Idaho. I haven’t dated a whole lot since. When you say “custody”…

…hang on. This isn’t part of my memory.

This is one of mine.

Jon: You were a kid once? You were an adorable kid?

Integra (past): Keep the power restriction unlocked until the target has been silenced!