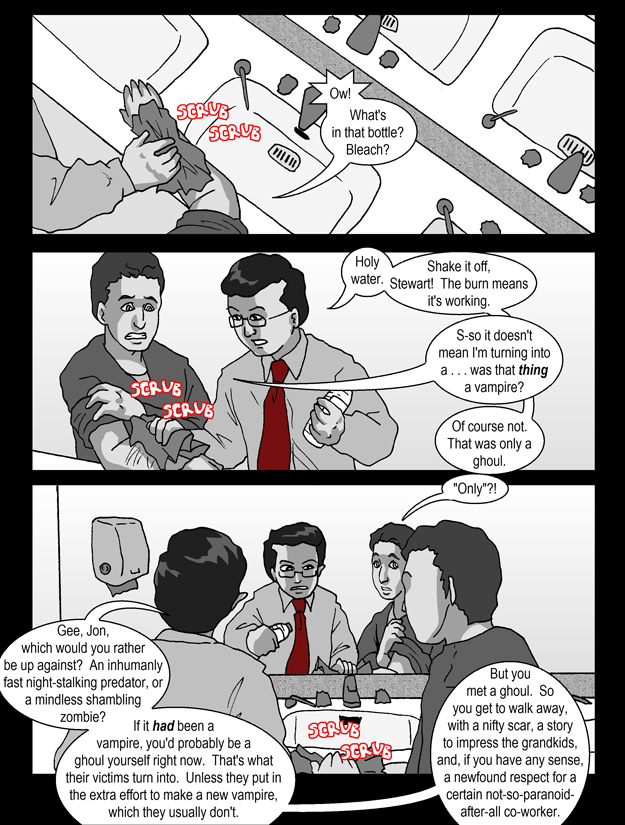 Jon: S-so it doesn’t mean I’m turning into a…was that thing a vampire?

Stephen: Of course not. That was only a ghoul.

Stephen: Gee, Jon, which would you rather be up against? An inhumanly fast night-stalking predator, or a mindless shambling zombie?

If it had been a vampire, you’d probably be a ghoul yourself right now. That’s what their victims turn into. Unless they put in the extra effort to make a new vampire, which they usually don’t.

But you met a ghoul. So you get to walk away, with a nifty scar, a story to impress the grandkids, and, if you have any sense, a newfound respect for a certain not-so-paranoid-after-all co-worker.

Joanne, aka Shadowfire, gets a prime viewing spot atop Walter’s head.

Girlycard: If you want to know what Jeeves thinks, you can ask him yourself. Hear that?

Fan 1: May you take off your clothes? I’d reward you with pleasure!

Walter: I don’t know how you can hear anything over all this racket.

Girlycard: You and your poor little human ears. There’s a car out front.

Fan 2: First off, I think Walter needs more credit. He does so much without Alucard’s help, and only then does Alucard come in. Besides that, he’s just so AWESOME! He has dental floss of doom and he’s not afraid to use it!