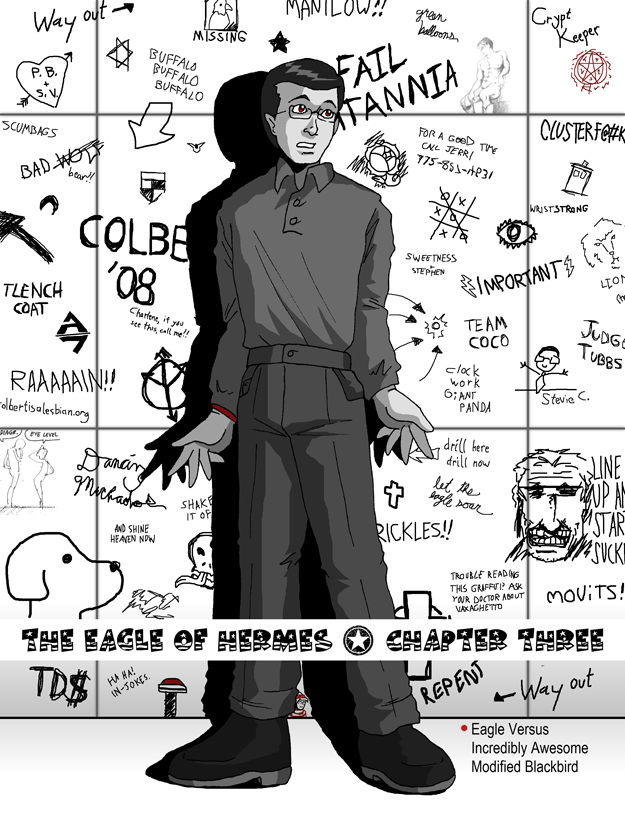 (Center, shadow side)
• The Geass symbol – from Code Geass.
• The Hellsing sigil – obvious.
• “COLBERT ’08” – Stephen’s Presidential campaign.
• “Charlene, if you see this, call me!!” – just one more way of reaching out to Charlene.
• Peace-sign-with-arrows-thing – from the original frontispiece.

(Center right)
• “CLUSTERF@#K” – one of TDS’ catchwords.
• Phone box – the TARDIS.
• “WRISTSTRONG” – Stephen’s wrist-health-awareness campaign.
• Lion – as drawn by Demetri Martin.
• “Judge Tubbs” – the late Stephanie Tubbs Jones.
• Portrait by Stevie C. – as drawn by Stephen in honor of himself.

(Bottom left)
• Sketched figures – from Wally Wood’s “22 Panels That Always Work”. Can you find the panel in the last chapter that uses this layout?
• Snoopy – Stephen’s pride and joy, being the only thing he can draw.
• “TD$” – bling worn by Big Stew.

(Bottom center, shadow side)
• “Dancing Muchachos” – title of a popular Exit 57 sketch in which Stephen dances.
• “SHAKE IT OFF” – mantra of Stephen’s, frequently addressed to himself.
• “AND SHINE HEAVEN NOW” – [link]
• The Dark Mark – from Harry Potter.
• Scribble – my actualfax signature.
• “HA HA! IN-JOKES.” – catchphrase of Phil Ken Sebben, Stephen’s character from Harvey Birdman.
• The God Machine – That’s not a God Machine. THIS is a God Machine.

(Bottom right)
• Portrait – an attempt at a Hirano-style Jon.
• “LINE UP AND START SUCKING” – Jon enjoying himself a little too much.
• “MOViTS!” – one of Stephen’s favorite obscure bands.
• “Way Out” – uh-oh.

Walter: That’s it. I’m out of ideas. The only question now is…

What would Jeeves do?

Girlycard: Other than tell you to cut your hair?

Walter: I’m growing it out. It’ll be long enough for a ponytail one of these days.