The Captain fans have descended: Theodora on the shoulder, Felina on the hat, Veriea tucked in the coat, and Becca hanging on the front.

Major: What are these things? Why are they so gleeful?

And, most of all…why does Captain Günsche have so many of them?

Major fan: YOU LOVE SWEETS AS MUCH AS I DO AND YOU’RE SUCH A TEDDY BEAR I JUST WANNA SNUGGLE YOU AS MUCH AS POSSIBLE AND I’D EVEN WEAR A TINY MINISKIRT FOR YOU EVEN THOUGH I HATE SKIRTS AND I’D MAKE ALL THE COOKIES YOU’D WANT!

Captain fan 1: I LOOOOVE CAPTAIN HE’S SOOO COOOOOOL AND SOOOOOO SEXY AND HIS HAIR ARE SOMETIMES BLOND AND SOMETIMES GREY

Captain fan 2: Captain!! The Nazi clad in the sexy trenchcoat!

Captain fan 3: Captain is awesome because he’s the epitome of the strong silent types and despite being one of the bad guys, he shows that he has honor when he [SPOILER] 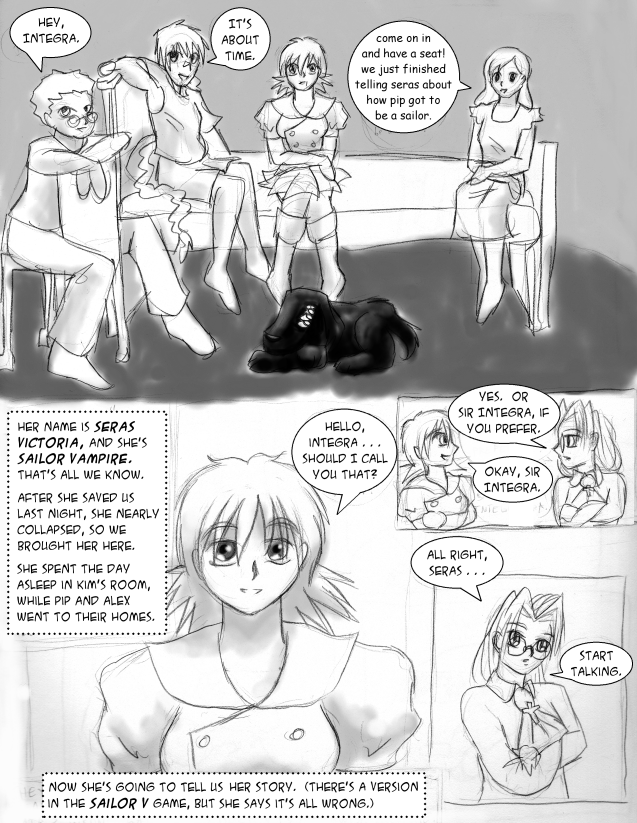 Kim: come on in and have a seat! we just finished telling seras about how pip got to be a sailor.

Integra (narrating): Her name is Seras Victoria, and she’s Sailor Vampire. That’s all we know. After she saved us last night, she nearly collapsed, so we brought her here. She spent the day sleep in Kim’s room, while Pip and Alex went to their homes.

Now she’s going to tell us her story (There’s a version in the Sailor V game, but she says it’s all wrong.)

Seras: Hello, Integra…should I call you that?

Integra: Yes. Or Sir Integra, if you prefer.