Caution: The upcoming week of strips deals with the murder of Seras’ parents. (Nothing new for readers of the Hellsing manga, but it’s a new level of pain as far as Shine is concerned.) If you’d like to miss it, skip forward to next Sunday.

Pretty Knight Sailor Hellsing. Come for the delicious crack; stay in spite of the bad art.

Integra: You’re mixing Hellsing with Sailor Moon? The two series have nothing in common!

Erin: Well, they both have soldiers in uniform.

Erin: But they do have short skirts — or haven’t you looked at Seras lately?

Integra: Okay, but we don’t have to recite long phrases in order to initiate attacks.

Erin: Except for “Releasing control art restriction system to level one…”

Integra: Nor do we carry around sparkly wands.

Erin: I dunno. That staff you had in Orders 11 and 12 was pretty awesome.

Integra: Have they ever fought vampires?

Integra: Okay, so there are a few superficial similarities in props and words. But the characters are completely different!

I’m looking for my girlfriend. She’s very tall, has light blonde hair and blue eyes, and dresses in men’s clothes. When people first meet her, they usually mistake her for a man. She also has a way with menacing glares, and she’s handy with a sword. Have you seen anyone like that around here?

Michiru: …hey, is she okay?

Erin: I think you broke her. 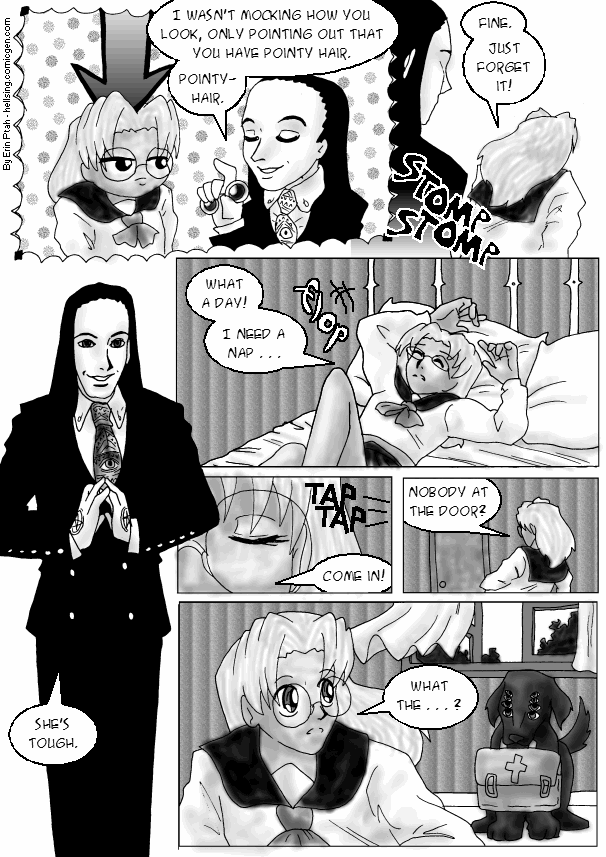 Brenner: I wasn’t mocking how you look, only pointing out that you have pointy hair. Pointy-hair.

Nobody at the door?