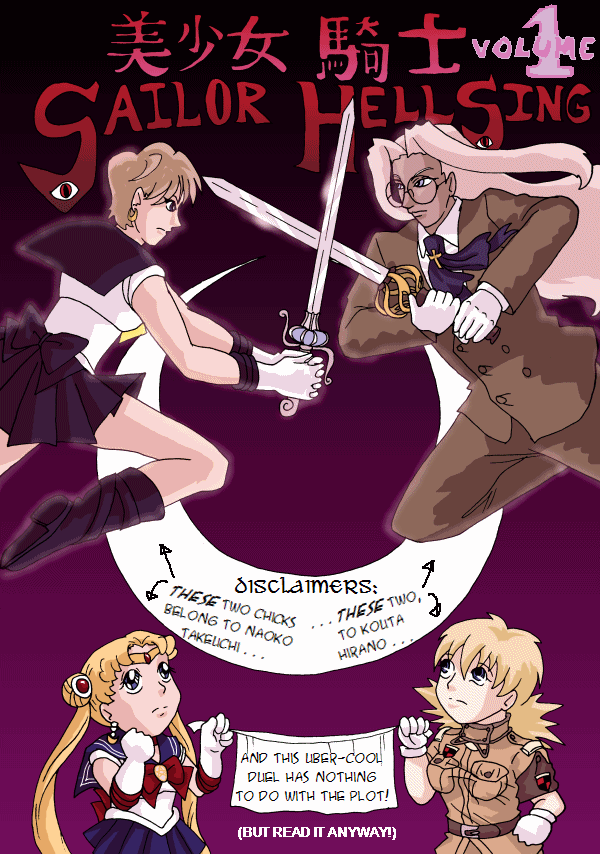 These two, to Kouta Hirano…

And this uber-cool duel has nothing to do with the plot! (But read it anyway!) 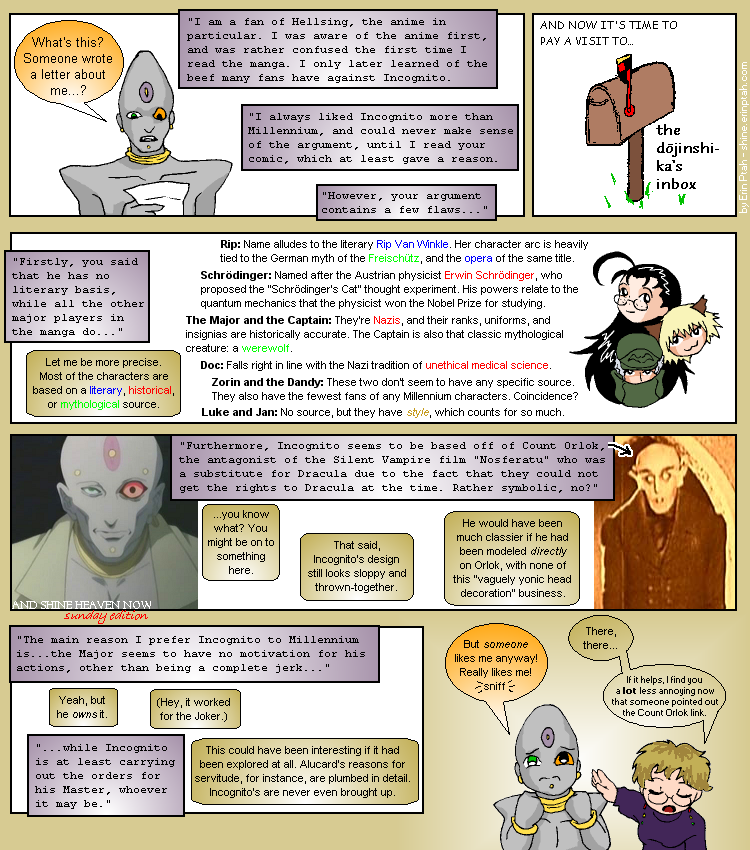 Questions/analysis sent in by the very insightful Tsukasa Macleod.

Incognito: What’s this? Someone wrote a letter about me…?

Letter: I am a fan of Hellsing, the anime in particular. I was aware of the anime first, and was rather confused the first time I read the manga. I only later learned of the beef many fans have against Incognito. I always liked Incognito more than Millennium, and could never make sense of the argument, until I read your comic, which at least gave a reason. However, your argument contains a few flaws…

Firstly, you said that he has no literary basis, while all the other major players in the manga do. I have never found any references in the characters Zorin, Alhambra, The Captain, The Doctor and even The Major. While Rip and Shro both have basis, these characters seem to be simply made up.

Erin: Let me be more precise. Most of the characters are based on a literary, historical, or mythological source.

Rip: Name alludes to the literary Rip Van Winkle. Her character arc is heavily tied to the German myth of the Freischütz, and the opera of the same name.

Schrödinger: Named after the Austrian physicist Erwin Schrödinger, who proposed the “Schrödinger’s Cat” thought experiment. His powers relate to the quantum mechanics that the physicist won the Nobel Prize for studying.

The Major and the Captain: They’re Nazis, and their ranks, uniforms, and insignias are historically accurate. The Captain is also that classic mythological creature: a werewolf.

Doc: Falls right in line with the Nazi tradition of unethical medical science.

Zorin and the Dandy: These two don’t seem to have any specific source. They also have the fewest fans of any Millennium characters. Coincidence?

Luke and Jan: No source, but they have style, which counts for so much.

Letter: Furthermore, Incognito seems to be based off of Count Orlok, the antagonist of the Silent Vampire film “Nosferatu” who was a substitute for Dracula due to the fact that they could not get the rights to Dracula at the time. Rather symbolic, no?

Erin: …you know what? You might be on to something here. That said, Incognito’s design still looks sloppy and thrown-together. He would have been much classier if he had been modeled directly on Orlok, with none of this “vaguely yonic head decoration” business.

Letter: The main reason I prefer Incognito of Millennium is…the Major seems to have no motivation for his actions other than being a complete jerk…

Letter: …while Incognito is at least carrying out the orders for his Master, whoever it may be.

Erin: This could have been interesting if it had been explored at all. Alucard’s reasons for servitude, for instance, are plumbed in detail. Incognito’s are never even brought up.

Incognito: But someone likes me anyway! Really likes me! *sniff*

Integra: There, there…if it helps, I find you a lot less annoying now that someone pointed out the Count Orlok link.