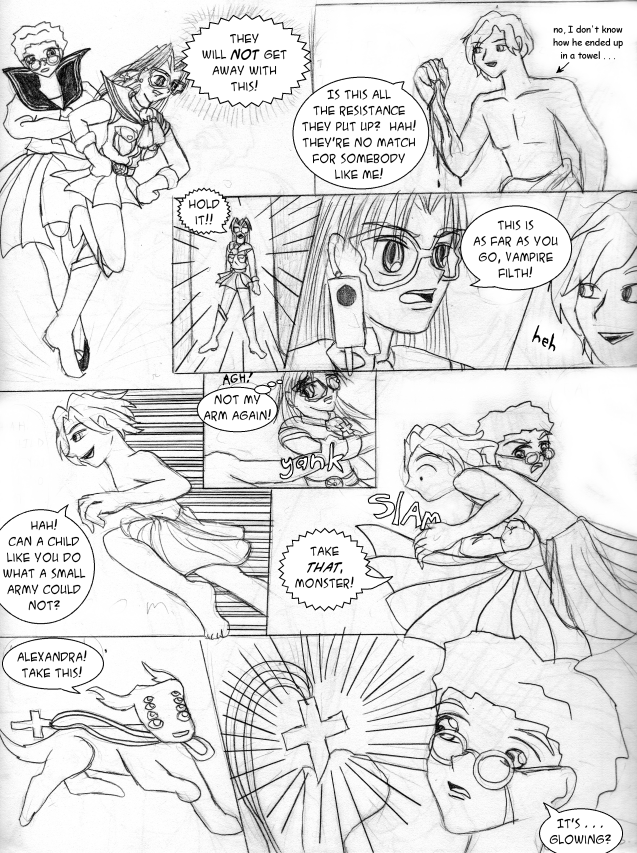 Integra (thinking): They will not get away with this!

Vampire: Is this all the resistance they put up? Hah! They’re no match for somebody like me!
[no, I don’t know how he ended up in a towel…]

This is as far as you go, vampire filth!

[heh]
Vampire: Hah! Can a child like you do what a small army could not?

This storyline is just full of callbacks, isn’t it? Seras refers to this scene.

Seras: Does Sir Integra know about this? She must, right? She knows everything about vampires.

Alucard: Now, why exactly would you bring our Master into this?

Seras: It’s just, she asked me to bite her once, so I–

Alucard: She did WHAT? 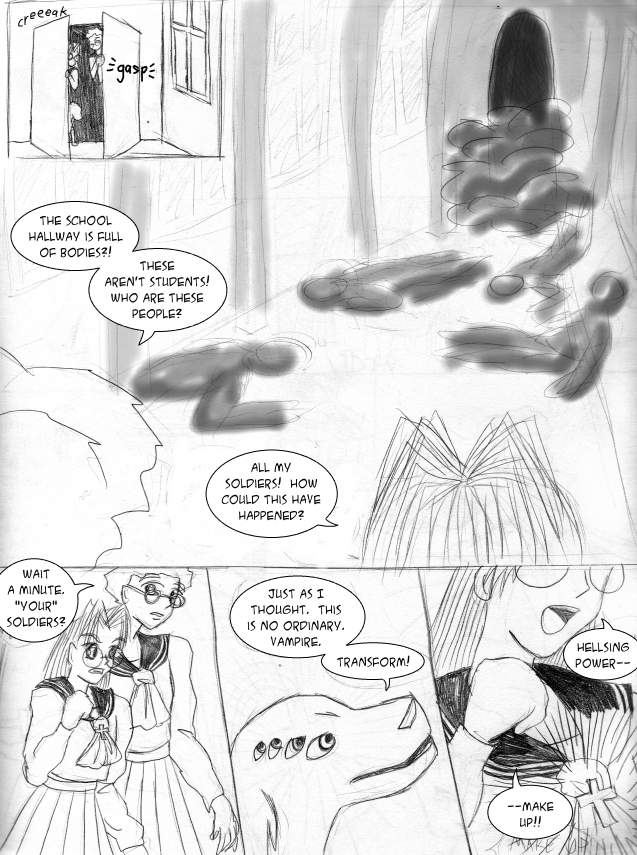 Alex: The school hallway is full of bodies?! These aren’t students! Who are these people?

Integra: All my soldiers! How could this have happened?

Alex: Wait a minute. “Your” soldiers?

Alunacard: Just as I thought. This is no ordinary vampire. Transform!

This bit of Order 04 is still canon in the Shineverse.

Seras: Wait just a minute. Does this mean…That time you drained that reporter, while I watched…

…I bit myself. I thought it was because I was so hungry, but you’re saying it was also…

Alucard: You were making a little quality time with your hand. 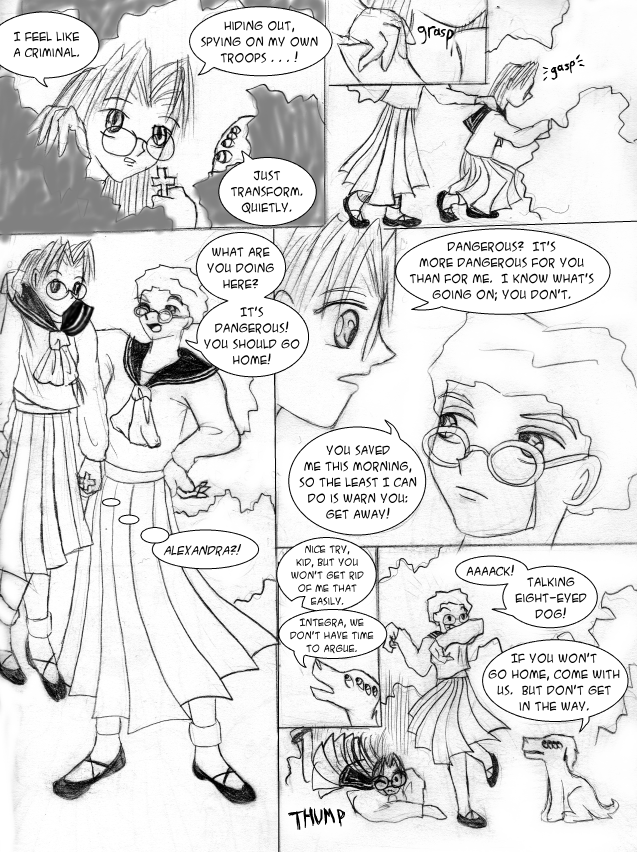 Integra: I feel like a criminal. Hiding out, spying on my own troops…!

Alex: What are you doing here? It’s dangerous! You should go home!

Integra: Dangerous? It’s more dangerous for you than for me. I know what’s going on; you don’t. You saved me this morning, so the least I can do is warn you: get away!

Alex: Nice try, kid, but you wont’ get rid of me that easily.

Alunacard: Integra, we don’t have time to argue.

Alunacard: If you won’t go home, come with us. But don’t get in the way.

Alucard: But for yourself, police girl…you need to drink.

There is a reason Victorian novelists used vampirism as a way to write stories about sex without getting them censored. Drinking isn’t just about sustenance. It’s about pleasure. 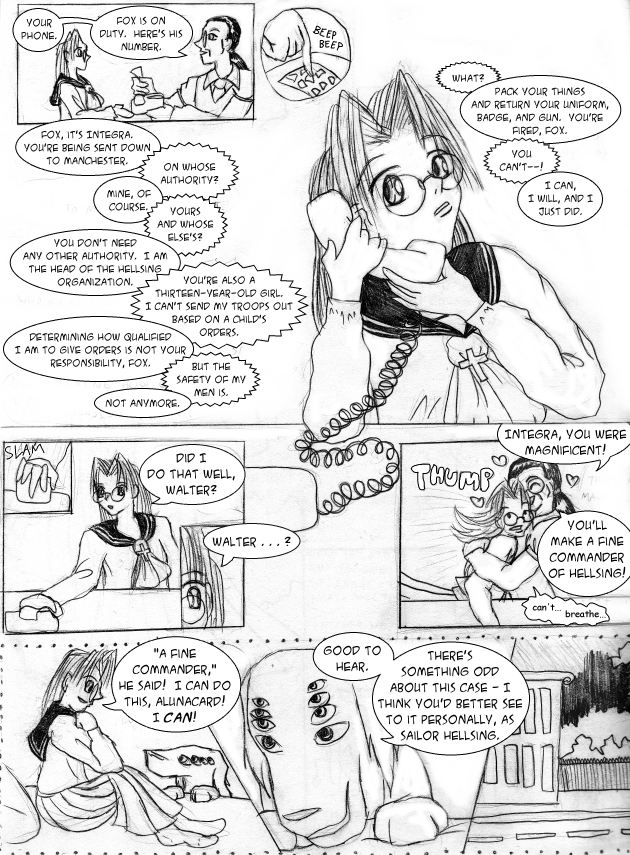 Walter: Your phone. Fox is on duty. Here’s his number.

Integra: Fox, it’s Integra. You’re being sent down to Manchester.

Fox: On whose authority?

Integra: Mine, of course.

Fox: Yours and whose else’s?

Integra: You don’t need any other authority. I am the head of the Hellsing Organization.

Fox: You’re also a thirteen-year-old girl. I can’t send my troops out based on a child’s orders.

Integra: Determining how qualified I am to give orders is not your responsibility.

Fox: But the safety of my men is.

Did I do that well, Walter?

[THUMP]
Walter: Integra, you were magnificent! You’ll make a fine commander of Hellsing!

“A fine commander,” he said! I can do this, Alunacard! I can!

Alunacard: Good to hear. There’s something odd about this case — I think you’d better see to it personally, as Sailor Hellsing. 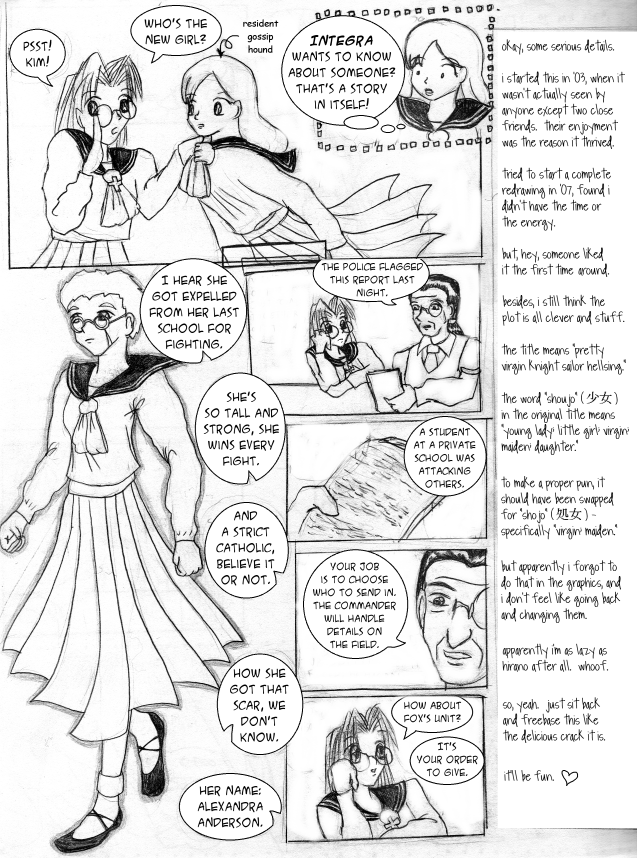 Alucard: It’s a little late to be wondering about the bats and the bees, police girl. You’re past that now. Unless you’re asking for the sake of somebody else?

Alucard: Finally succumbing to his bad-boy charms, are you?

Seras: This is all hypothetical! I swear!