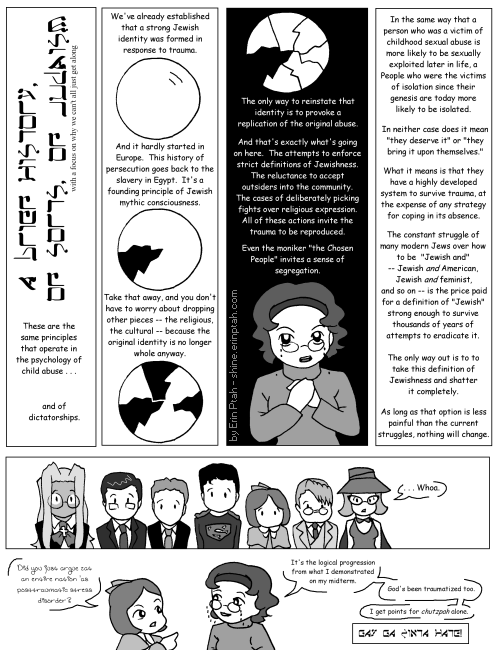 Note from The Future: …on rereading this 10 years later, I’m thinking I didn’t make it clear enough that “destroy” means “destroy so you have a nice clear area on which to build a new trauma-free version from the ground up.” Although I did get a good grade, so the professor must have figured it out, at least.

Erin: These are the same principles that operate in the psychology of child abuse…and of dictatorships.

We’ve already established that a strong Jewish identity was formed in response to trauma. And it hardly started in Europe. This history of persecution goes back to the slavery in Egypt. It’s a founding principle of Jewish mythic consciousness.

Take that away, and you don’t have to worry about dropping other pieces — the religious, the cultural — because the original identity is no longer whole anyway.

The only way to reinstate that identity is to provoke a replication of the original abuse. And that’s exactly what’s going on here. The attempts to enforce strict definitions of Jewishness. The reluctance to accept outsiders into the community. The cases of deliberately picking fights over religious expression. All of these actions invite the trauma to be reproduced.

Even the moniker “the Chosen People” invites a sense of segregation.

In the same way that a person who was a victim of childhood sexual abuse is more likely to be sexually exploited later in life, a People who were the victims of isolation since their genesis are today more likely to be isolated.

In neither case does it mean “they deserve it” or “they bring it upon themselves.” What it means is that they have a highly developed system to survive trauma, at the expense of any strategy for coping in its absence.

The constant struggle of many Jews over how to be “Jewish and” — Jewish and American, Jewish and feminist, and so on — is the price paid for a definition of “Jewish” strong enough to survive thousands of years of attempts to eradicate it. The only way out is to take this definition of Jewishness and shatter it completely. As long as that option is less painful than the current struggles, nothing will change.

Madeline: Did you just argue zat an entire nation ‘as post-traumatic stress disorder?

Erin: It’s the logical progression from what I demonstrated in my midterms. God’s been traumatized too. I get points for chutzpah alone.