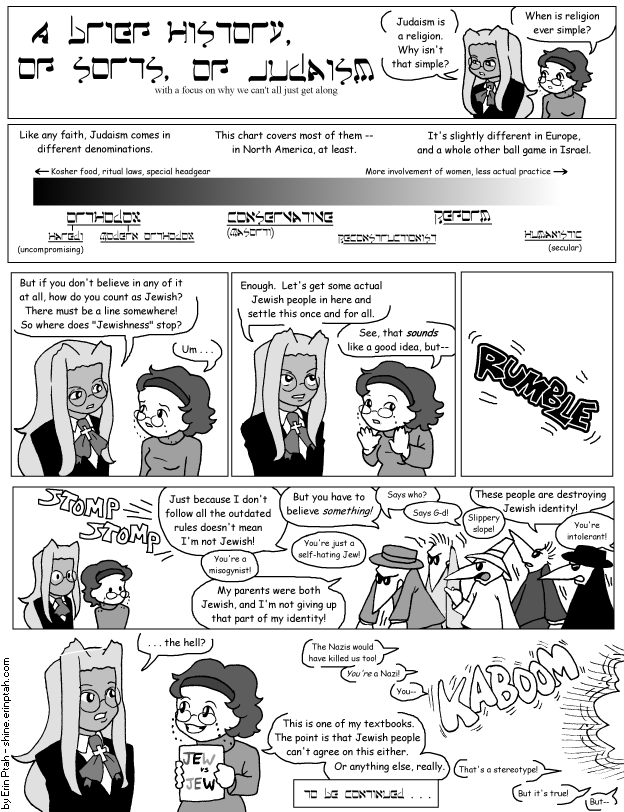 Integra: Judaism is a religion. Why isn’t this simple?

Erin: When is religion ever simple?

Like any faith, Judaism comes in different denominations. This chart covers most of them — in North America, at least. It’s slightly different in Europe, and a whole other ball game in Israel.

Integra: But if you don’t believe in any of it at all, how do you count as Jewish? There must be a line somewhere! So where does “Jewishness” stop?

Integra: Enough. Let’s get some actual Jewish people in here and settle this once and for all.

Erin: See, that sounds like a good idea, but–

Crowd: Just because I don’t follow all the outdated rules doesn’t mean I’m not Jewish / But you have to believe something! / Says who? / Says G-d! / You’re a misogynist! / You’re just a self-hating Jew! / My parents were both Jewish, and I’m not giving up that part of my identity! / Slippery slope! / These people are destroying Jewish identity! / You’re intolerant!

Erin: This [Jew vs. Jew] is one of my textbooks. The point is that Jewish people can’t agree on this either. Or anything else, really.