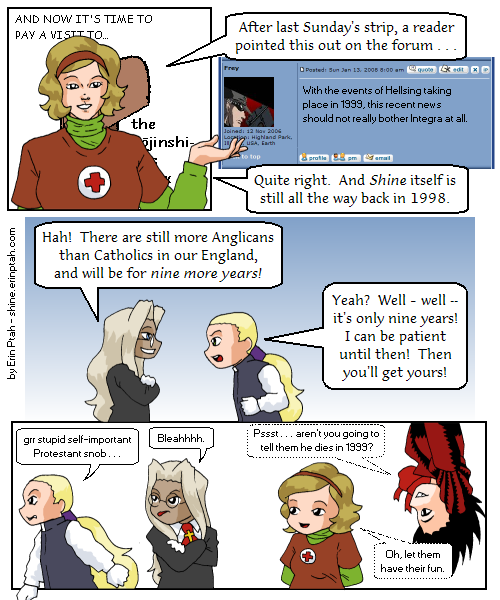 Erin: After last Sunday’s strip, a reader pointed this out on the forum…

Forum: With the events of Hellsing taking place in 1999, this recent news should not really bother Integra at all.

Erin: Quite right. And Shine itself is still all the way back in 1998.

Integra: Hah! There are still more Anglicans than Catholics in our England, and will be for nine more years!

Enrico: Yeah? Well — well — it’s only nine years! I can be patient until then! Then you’ll get yours!

Alucard: Pssst…aren’t you going to tell them he dies in 1999?

Erin: Oh, let them have their fun.

Timothy (thinking): Hey, there’s the greenhouse. The familiar went in there.

Angel: Don’t go in, Timothy! Heinkel told you to stay out of trouble! What if the witch is inside?

Angel: Well, they are pretty…

Cameos: Mai and Mikoto, from My-HiME.

Timothy (thinking): Don’t get in trouble…

Keep an eye out for anything unusual…

Amon: I thought this was a girls’ school?

Amon: We just passed a boy in uniform.

Girl (translated by Yumiko): {…since my last confession. These are my sins…I was unkind to my petite soeur.}

{We were under the ginkgo trees when I pressed her up against a trunk.}

{“Onee-sama!” she exclaimed, her cheeks flushing. “We’re outside!” “There’s no one around,” I assured her, and slipped my hand under her skirt…}

Heinkel: Give this one five Hail Marys and send her along.

Tell her to do eight Hail Marys and go in peace.

Yumiko: How are you picking the numbers?

Heinkel: At random. Why?

Yumiko: What if they start comparing penances?

Yoshino: {Bless me, Father, for I have sinned. It has been one week since my last confession. These are my sins…}

Yumiko (translating): “Bless me, Father, for I have sinned…”

Yoshino: {I’ve been impatient and inconsiderate. I shouted at a girl who didn’t deserve it. I snapped at my soeur…}

Yumiko (translating): “…and I slapped this one girl, although frankly she had it coming,” she says.

Heinkel: Well, she’s not the witch. If she could just hex people who annoyed her, she wouldn’t go to this much trouble. 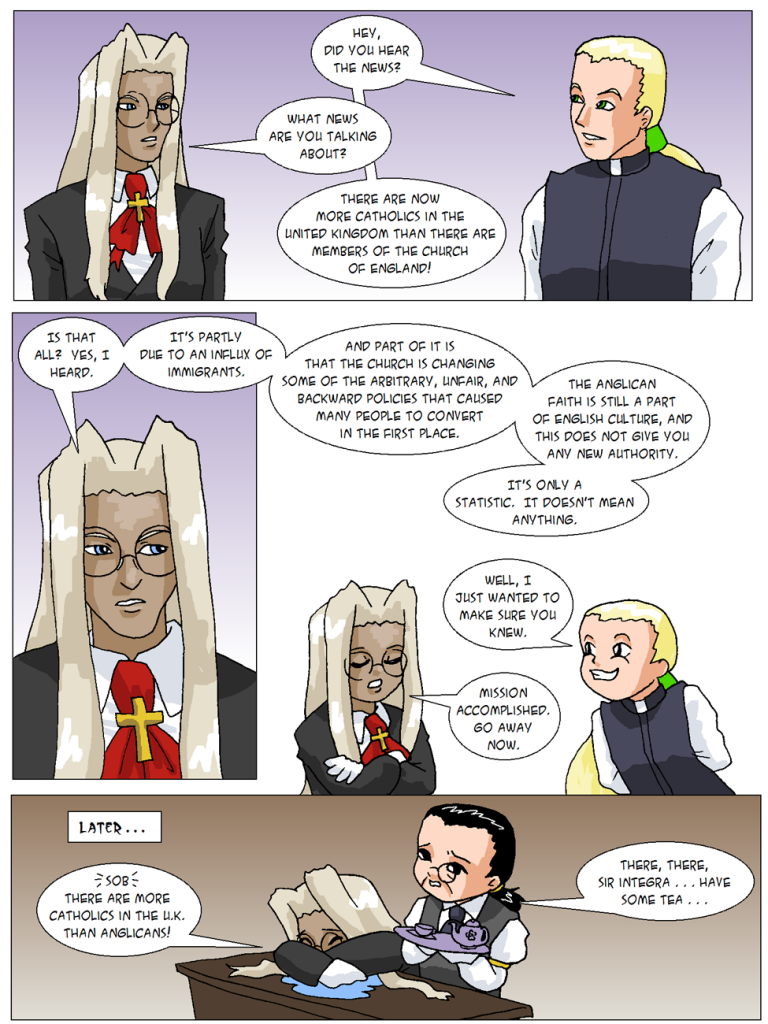 Yumi: {Um…Sister? Why are you going in as well?}

Yumi: {But since you aren’t the priest, is that allowed?}

Heinkel: Tell her that when the Vatican does it, that means it is not illegal.

Yumi: {And this is our chapel. The tour ends here. The confessional is all set up for you. Thank you very much for coming!}

Heinkel: While we handle this, explore the campus. Take note of anything unusual.

And stay out of trouble! That’s an order!

Timothy: Those two girls! They were–!

Timothy: But they were kissing!

Timothy: She said “soeur.” Is that what all soeur relationships are like?