Anthy: My last school had a lot of excitement, and I was always in the middle of it.

Robin (thinking): Amon and I must find the Vatican agents before they find the witch…

Anthy: So, even though it’s quiet here, I don’t mind.

Heinkel & Yumiko (thinking): We need to find this girl and see if she’s the witch…

Anthy: It’s not that I won’t want more excitement one day, but not yet.

Timothy: Um…there’s something I need to tell you.

Heinkel: There. Time’s up. Who’s left?

Heinkel: Who in the what now?

Yumiko: It means she’s the petite soeur of Rosa Gigantea.

Heinkel: What kind of a name is that?

Yumiko: It isn’t a name.

“Rosa Gigantea” is the title of one student council member. We’ll find her, and her petite soeur, at the Rose Mansion.

While Heinkel and Yumiko take those last few confessions…

Amon: –at a Japanese girls’ school–

Robin: –he could be the witch.

Amon: –he’s from the Vatican.

Robin: You really think the church would use a teenage boy?

Heinkel: …go, and sin no more.

Heinkel: We’re scheduled to be here for ten more minutes. How many girls haven’t showed?

Yumiko: Half a dozen. But some might just be late.

Heinkel: How long do you want to wait?

Yumiko: Could we stay half an hour?

Heinkel: Twenty minutes. Anyone who hasn’t showed by then, we go after. 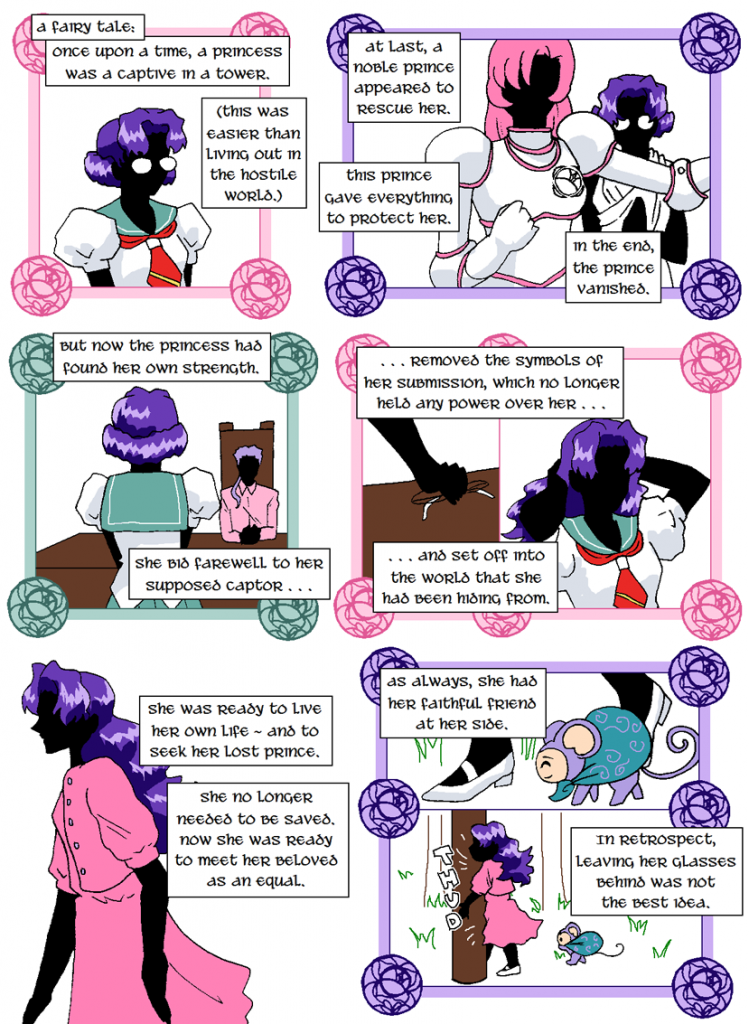 Anthy: When that girl left the school, so did I.

Timothy: Did she transfer here?

Anthy: No. I don’t know where she is. There was…

And when it was over, she had disappeared.

Anthy: There was one other reason…do you know about Lillian’s soeur system?

Anthy: We didn’t have that at my old school.

But there was this one girl…you could say she was my grande soeur.

Timothy: I only got here yesterday, and I can already tell that it’s a beautiful school.

Anthy: Where are you from?

Timothy: …and now I’m living at the orphanage, but it’s okay, because I love my job.

Anthy: That’s very brave of you.

Timothy: So why did you leave your old school?

Anthy: I realized I was only there because other people wanted me to be.

Timothy: That doesn’t sound complicated at all!

Note from The Future: This is the one strip where I don’t have the high-res version, because the working file wasn’t saved properly.

This storyline takes place the year after the end of the Revolutionary Girl Utena TV series. If you haven’t seen it, don’t worry: all the relevant backstory will be explained within the strip.

Timothy: So do you take care of these roses? They’re gorgeous.

Anthy: Yes. It isn’t official. I just asked the school if I could help with the flowers.

Timothy: Did you plant any of them?

Anthy: No. I haven’t been here for that long.

Timothy: Oh, wow, these are gorgeous!

Timothy: Oh! I’m sorry, I didn’t know anybody was in here!

Timothy: Hey, you understand me!

Timothy: Oh, good! Because I don’t remember how to apologize in Japanese.