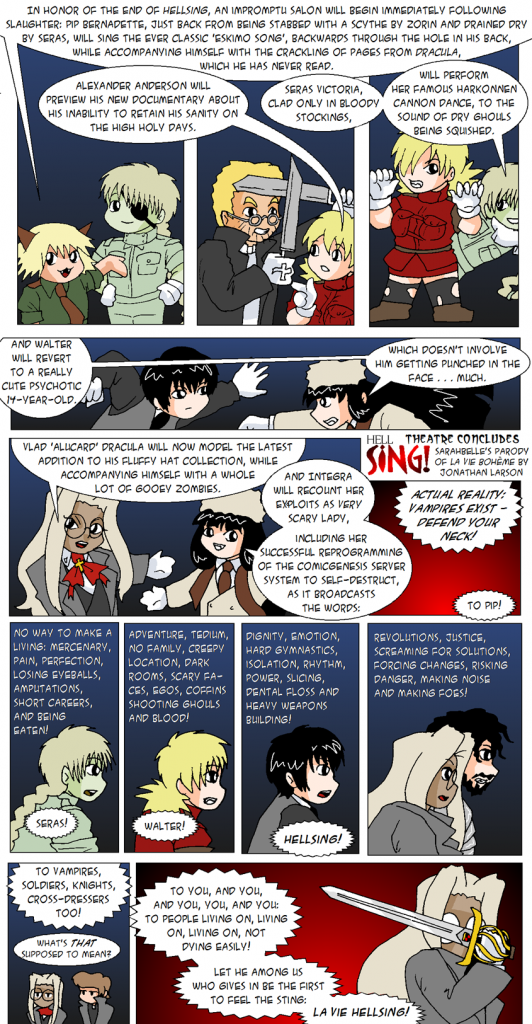 The final installment of the song, text-heavy to make up for the last one.

(And it explains why ComicGen keeps crashing…)

Schrödinger: In honour of the end of Hellsing, an impromptu salon will commence immediately following slaughter: Pip Bernadette, just back from getting stabbed with a scythe by Zorin and drained dry by Seras, will sing the ever classic ‘Eskimo Song’, backwards, through the hole in his back, while accompanying himself with the crackling of pages from ‘Dracula’, which he has never read.

Seras: Alexander Anderson will preview his new documentary about his inability to retain his sanity on the high holy days.

Pip: Seras Victoria, clad only in bloody stockings, will perform her famous Harkonnen cannon dance, to the sound of dry ghouls getting squished.

Alucard: And Walter will revert to a really cute psychotic fourteen year old…which doesn’t involve him getting punched in the face…much.

Integra: ‘Alucard’ Vlad Tepes will now model the latest addition to his fluffy hat collection, while accompanying himself with lots of gooey zombies.

Alucard: And Integra will recount her exploits as a very scary lady,
Including the successful reprogramming of the ComicGenesis server system system to self-destruct, as it broadcasts the words:

[All]
To vampires, soldiers, knights,
Cross-dressers too!

Integra and Heinkel: What’s that supposed to mean?

Let he among us who gives in
Be first to feel the sting
La Vie Hellsing!