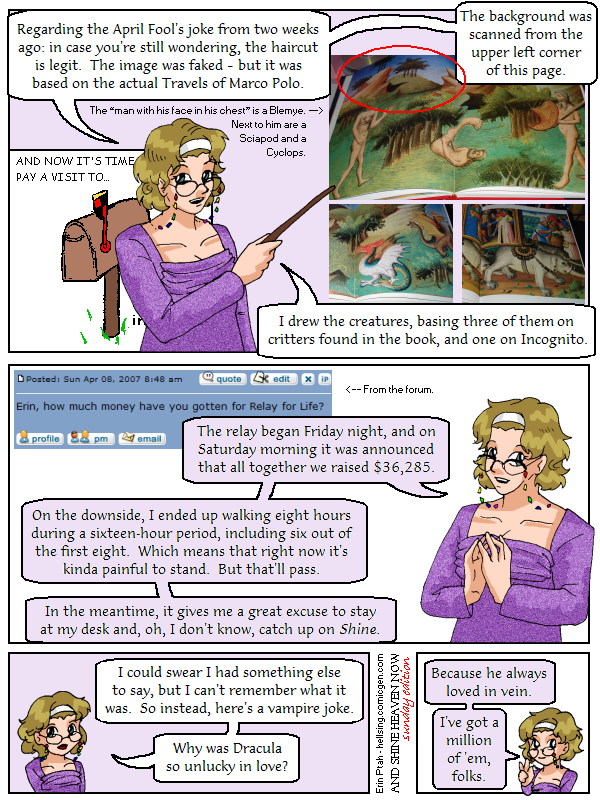 Erin: Regarding the April Fool’s joke from two weeks ago: in case you’re still wondering, the haircut is legit. The image was faked — but it was based on the actual Travels of Marco Polo. The background was scanned from the upper left corner of this page.

The “man with his face in his chest” is a Blemye. Next to him are a Sciapod and a Cyclops.

I drew the creatures, basing three of them on critters found in this book, and one on Incognito.

Forum question: Erin, how much money have you gotten for Relay for Life?

Erin: The relay began Friday night, and on Saturday morning it was announced that all together we raised $36,285.

On the downside, I ended up walking eight hours during a sixteen-hour period, including six out of the first eight. Which means that right now it’s kinda painful to stand. But that’ll pass. In the meantime, it gives me a great excuse to stay at my desk and, oh, I don’t know, catch up on Shine.

I could swear I had something else to say, but I can’t remember what it was. So instead, here’s a vampire joke.

Why was Dracula so unlucky in love?

Because he always loved in vein. I’ve got a million of ’em, folks.