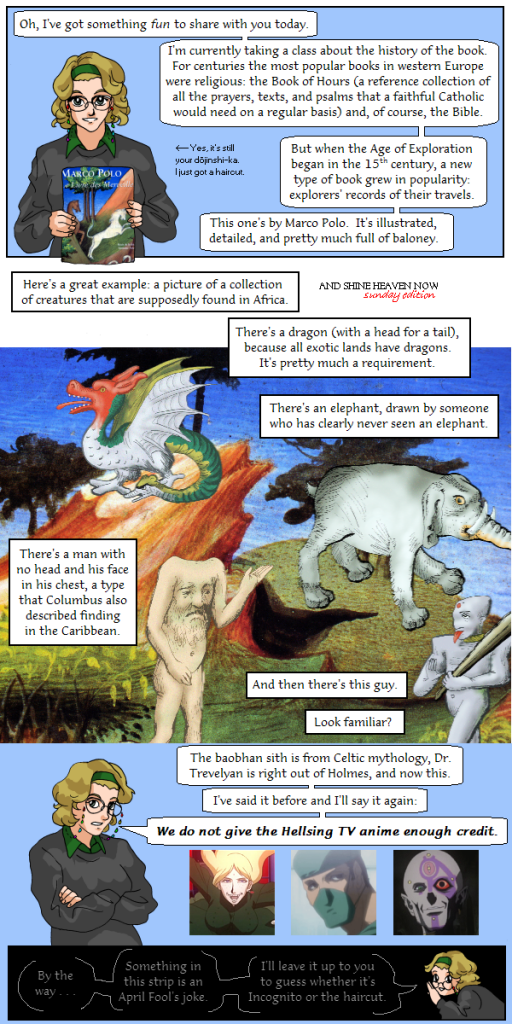 Skip to two weeks later for the follow-up.

Erin: Oh, I’ve got something fun to share with you today.

[Yes, it’s still your doujinshi-ka. I just got a haircut.]

I’m currently taking a c lass about the history of the book. For centuries the most popular books in western Europe were religious: the Book of Hours (a reference collection of all the prayers, texts, and psalms that a faithful Catholic would need on a regular basis) and, of course, the Bible.

But when the Age of Exploration began in the 15th century, a new type of book grew in popularity: explorers’ records of their travels. This one’s by Marco Polo. It’s illustrated, detailed, and pretty much full of baloney.

Here’s a great example: a picture of a collection of creatures that are supposedly found in Africa.

There’s a dragon (with a head for a tail), because all exotic lands have dragons. It’s pretty much a requirement. There’s an elephant, drawn by someone who has clearly never seen an elephant. There’s a man with no head and his face in his chest, a type that Columbus also described finding in the Caribbean.

And then there’s this guy. Look familiar?

The baobhan sith is from Celtic mythology, Dr. Trevelyan is right out of Holmes, and now this. I’ve said it before and I’ll say it again: We do not give the Hellsing TV anime enough credit.

By the way…something in this strip is an April Fool’s joke. I’ll leave it up to you to guess whether it’s Incognito or the haircut.