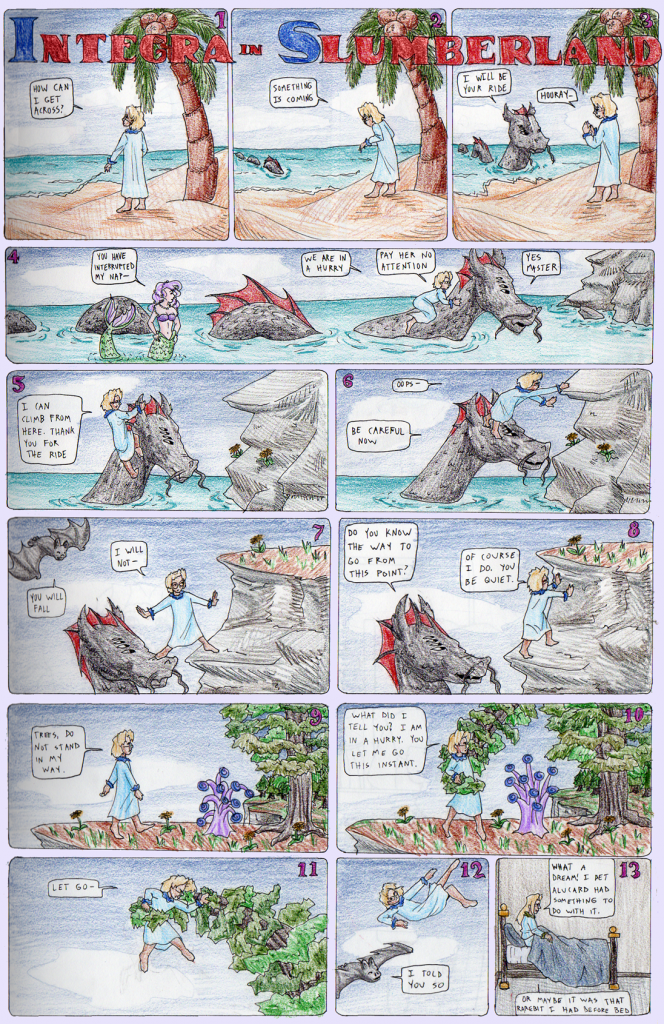 Comics geekery ahead. Bear with me. (Or skip this entirely, if you’re so inclined.)

This strip is imitating the style of Winsor McKay’s Little Nemo in Slumberland, one of the very earliest comic strips. This was in the era when comics took up a whole side of a newspaper page; I used two full sketchbook pages to draw it. (A typical Shine Sunday takes one, while normal dailies are drawn two to a page.)

The ‘plot’ of any given strip was almost always this sort of exploration of surreal dream-events (this was at the same time as Freud was first publishing his writings about dreams and the subconscious), with fantastic landscapes drawn in meticulous detail. Here’s an example – though it’s in Dutch for some reason. The full-size version is 1320 KB, because you simply can’t read it otherwise.

Despite the variant sizes, shapes, and subjects of the other panels, the last panel was always a small square showing Nemo (the dreamer) waking up. (In this strip’s final panel I’ve also borrowed from another strip of McKay’s, Dreams of a Rarebit Fiend, in which the waking dreamer’s bizarre nightmares are blamed on eating too much Welsh rarebit before bed.)

There weren’t punch lines in these strips. Although there were always some comics with humor, the modern punch line and its pacing didn’t take hold until Peanuts.

Something else that’s unusual about this type of strip: the perspective. All the shots seem to be from the same angle and distance; there are no close-ups, no bird’s-eye views, no change in camera angle.

Now here’s why: At the beginning of the 20th century, these things didn’t exist yet. Film technology was still at the point of “let’s set a camera up and turn it on.” The vocabulary that we use for these things in comics – “close-ups, bird’s-eye views, camera angles” – is all film vocabulary, because it was all invented in film, and applied to comics later.

However, notice how the action moves very little from panel to panel here: how they could almost be keyframes in an animated cartoon?

That’s not coincidence either. Winsor McKay used his comics to experiment. He later went on to basically invent the cartoon.

Don’t tell me that’s not cool.

Integra: How can I get across?

Sea monster Alucard: I will be your ride

Mermaid: You have interrupted my nap–

Integra: We are in a hurry

Pay her no attention

Integra: I can climb from here. Thank you for the ride

Bat: You will fall

Integra: I will not–

Alucard: Do you know the way to go from this point?

Integra: Of course I do. You be quiet

Trees, do not stand in my way

What did I tell you? I am in a hurry. You let me go this instant.

What a dream! I bet Alucard had something to do with it. Or maybe it was that rarebit I had before bed