Handling security at the art room is Will, volunteer at Phoenix ConGames and all-around nice guy.

Enrico (thinking): But this bag is coming with me. I paid for it, and it’s mine. I’m not letting it go.

Staffer: Sorry, but to enter the art show you need to leave your bag at the door.

Prequel humor. You may remember present-day Enrico speaking Greek and playing the board game about Paul.

Game: A winner is you!

Enrico (thinking): What else is going on?

“Learn the Greek Alphabet.” Hah. I speak the language fluently, not that my parents care.

“Trace Paul’s Journeys.” Nah. Not until it gets made into a board game.

Based on an actual game called Zombie Versus Ambulance. As you might guess, it has very sophisticated gameplay.

Heinkel: How did I end up carrying everything?

Enrico: The Pope should be above such things.

Dude! They have Zombie Vs. Jesus!

Gratuitous Marimite reference, which will be plot-important in a couple of years. Enrico’s only telling this part of the story because it makes him look good.

What do you think, Chief? Would Yumiko like this one?

Enrico: Doesn’t she have a rosary? From that high school of hers?

Heinkel: She was only there for a year…

Enrico: Still, it seems like it was important to her.

Heinkel: Since when are YOU the insightful one? 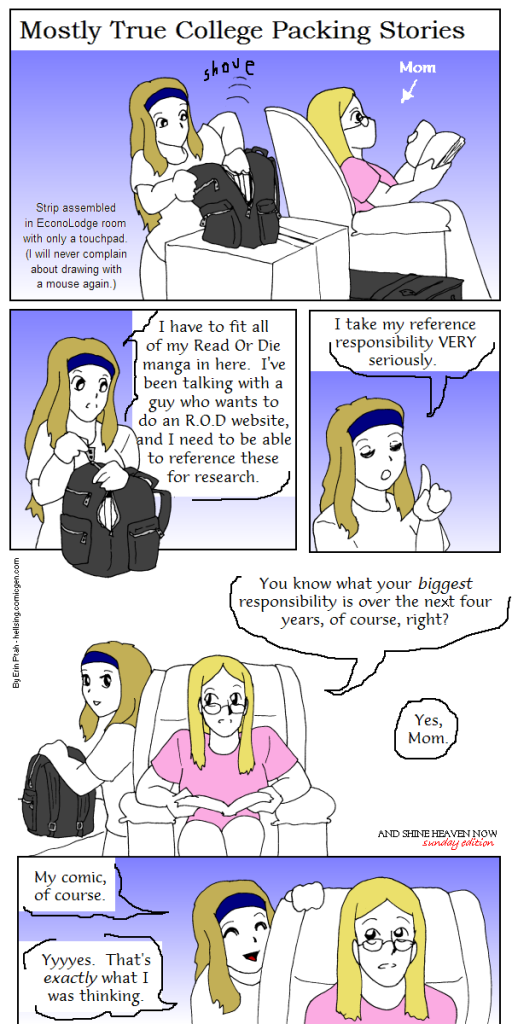 Strip assembled in EconoLodge room with only a touchpad. (I will never complain about drawing with a mouse again.)

Erin: I have to fit all of my Read or Die manga in here. I’ve been talking with a guy who wants to do an R.O.D website, and I need to be able to reference these for research.

Mom: You know what your biggest responsibility is over the next four years, of course, right?

My comic, of course.

Mom: Yyyes. That’s exactly what I was thinking.

Filler art (here on DA), replacing the “Sorry for the delay – my computer hasn’t been connected to the Wheaton network yet!” message.

Down in the Basement:

Enrico: This is the dealer’s room? It’s full of junk.

Heinkel: But it’s CHEAP junk. And usually hard to find. Like, check that out!

Enrico: …Is that the Shourd of Turin?

Definition Corner: The Shroud of Turin is a piece of cloth bearing the impression of a crucified man and thought by some to be the burial shroud of Jesus, although radiocarbon dating suggests that it is a fake.

Heinkel’s surprised that Enrico knew Yumie’s schedule; s/he had long forgotten it. Enrico is unaware that his ability to keep track of people is anything special, but he’s not about to pass on an opportunity to brag if he gets it.

Genericon volunteer and former CTYer Diana is the third panelist. If you recognize Seira Mimori, you’ll be less surprised later on.

Heinkel: Did we lose Yumie?

Enrico: No; it’s been five minutes. She’s at her panel.

Heinkel: How do you DO that?

Enrico: I’m just that good. (thinking) Do what?

Panelist: Let’s start by going around and introducing ourselves, okay?

My name is Mimori Seira. My dream is to be a nun and spread God’s love.

Yumie: My name is Takagi Yumie. My dream is to kill anyone who won’t accept God’s love.

Narration: But, despite the “Four Creatures” cosplayers, Alex had

Enrico: –gone? You mean he’s not going to be here for the whole day?

Heinkel: Don’t worry; he left us the food.

Enrico: That’s not the point.

The point is that he’s not going to see my triumph in PPR this afternoon.

Enrico: Ohhh no you don’t.

True story. Happened with my Hellhound plushie at Otakon ’05. (The cosplayers were Tokyo Mew Mew characters, though, not the Four Living Creatures who come out in the Book of Revelations.)

Yumie: He went home. He’ll be back in the evening for the masquerade.

Narration: I later learned that Alex had an obstacle in leaving.

Look at the sweet wolf!

Aren’t you just the cutest little vicious killing machine? Yes, you are!

And I just wanna hug you, and cuddle you, but you’d probably rip me up an’ eat me, but that’s okay because you’re just hungry, right? Aww, how cute you are!