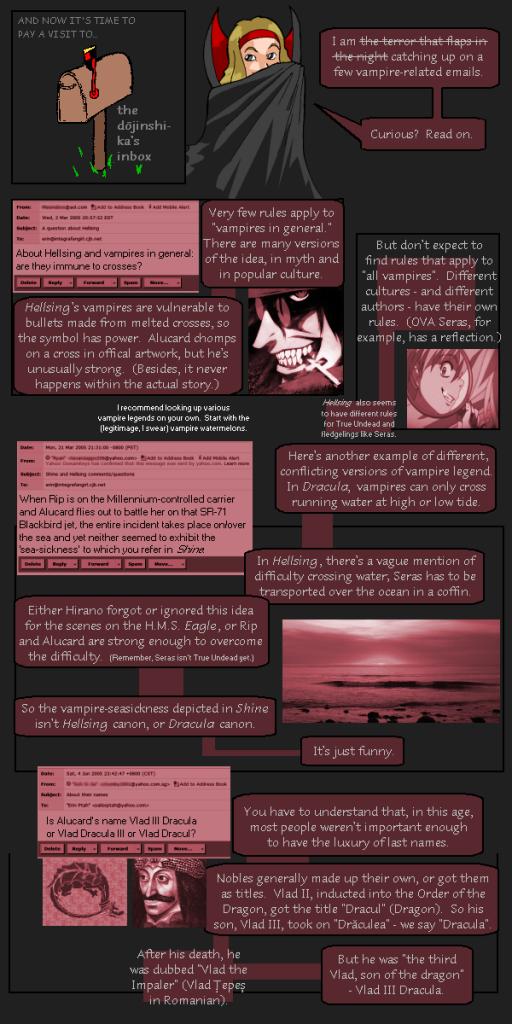 Erin: I am catching up on a few vampire-related emails. Curious? Read on.

Reader: About Hellsing and vampires in general: are they immune to crosses?

Erin: Very few rules apply to “vampires in general.” There are many versions of the idea, in myth and popular culture.

Hellsing’s vampires are vulnerable to bullets made from melted crosses, so the symbol has power. Alucard chomps on a cross in officila artwork, but he’s unusually strong. (Besides, it never happens within the actual story.)

I recommend looking up various vampire legends on your own. Start with the (legitimate, I swear) vampire watermelons.

But don’t expect to find rules that apply to “all vampires.” Different cultures — and different authors — have their own rules. (OVA Seras, for example, has a reflection.)

Hellsing also seems to have different rules for True Undead and fledglings like Seras.

Reader: When Rip is on the Millennium-controlled carrier and Alucard fflies out to battle her on that SR-71 Blackbird jet, the entire incident takes place on/over the sea and yet neither seemed to exhibit the ‘sea-sickness’ to which you refer in Shine.

Erin: Here’s another example of different, conflicting versions of vampire legend. In Dracula, vampires can only cross running water at high or low tide. In Hellsing, there’s a vague mention of difficulty crossing water. Seras has to be transported over the ocean in a coffin.

Either Hirano forgot or ignored this idea for the scenes on the H.M.S. Eagle, or Rip and Alucard are strong enough to overcome the difficulty. (Remember, Seras isn’t True Undead yet.)

Erin: You have to understand that, in this age, most people weren’t important enough to have the luxury of last names.

Nobles generally made up their own, or got them as titles. Vlad II, inducted into the Order of the Dragon, got the title “Dracul” (Dragon). So his son, Vlad III, took on “Draculea” — we say “Dracula.”

After his death, he was dubbed “Vlad the Impaler” (Vlad Tepes in Romanian). But he was “the third Vlad, son of the dragon” — Vlad III Dracula.