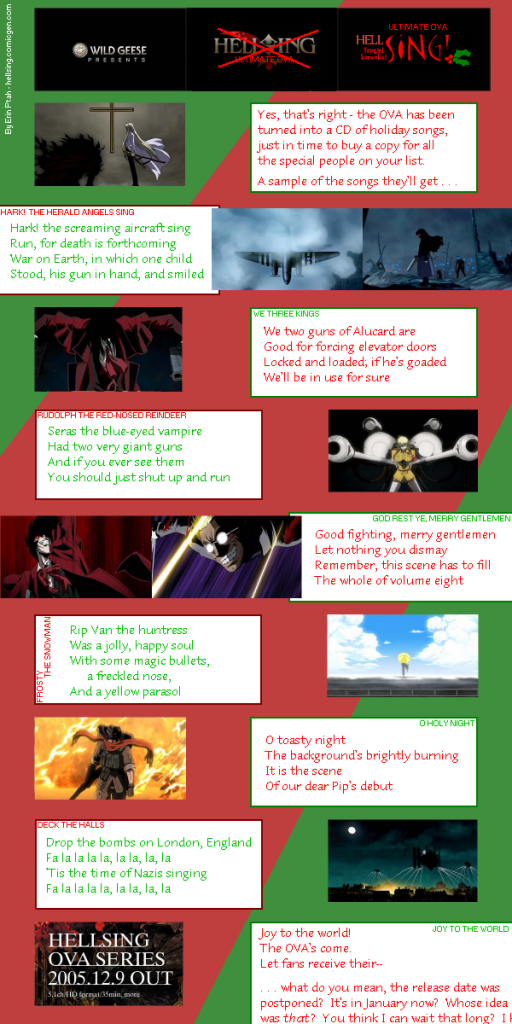 The new release date (for the first episode) is January 25. The whole thing is slated to take three years, by the way. (Update from 2008: HAH.)

Yes, that’s right – the OVA has been turned into a CD of holiday songs, just in time to buy a copy for all the special people on your list. A sample of the songs they’ll get…

Hark! The Herald Angels Sing
Hark! the screaming aircraft sing
Run, for death is forthcoming
War on Earth, in which one child
Stood, his gun in hand, and smiled

We Three Kings
We two guns of Alucard are
Good for forcing elevator doors
Locked and loaded; if he’s goaded
We’ll be in use for sure

Frosty The Snowman
Rip Van the Huntress
Was a jolly, happy soul
With some magic bullets,
a freckled nose,
and a yellow parasol

Joy To The World
Joy to the world!
The OVA’s come.
Let fans receive their–

…what do you mean, the release date was postponed? It’s in January now? Whose idea was that? You think I can wait that long? I