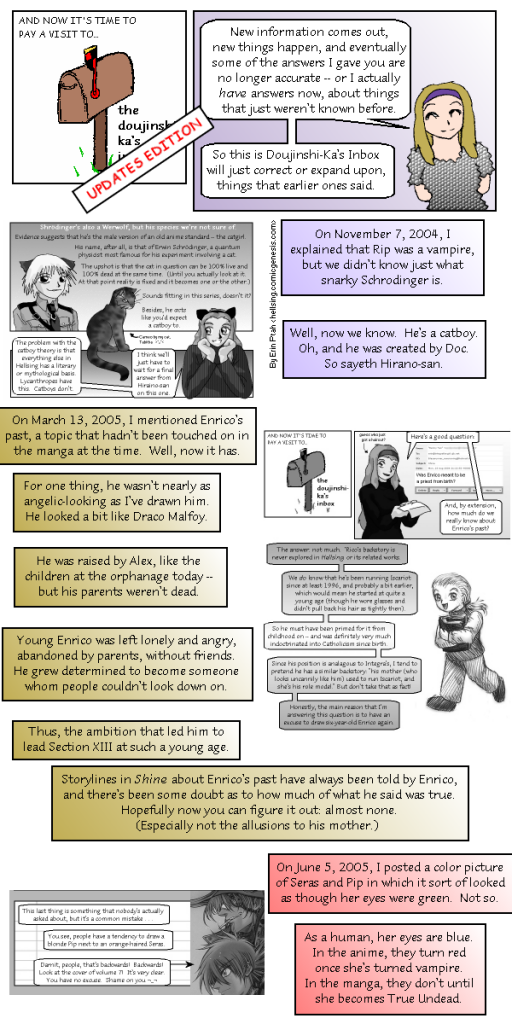 Erin: New information comes out, new things happen, and eventually some of the answers I gave you are no longer accurate — or I actually have answers now, about things that just weren’t known before.

So this Doujinshi-Ka’s Inbox will just correct or expand upon things that earlier ones said.

On November 7, 2004, I explained that Rip was a vampire, but we didn’t know just what snarky Schrödinger is.

Well, now we know. He’s a catboy. Oh, and he was created by Doc. So sayeth Hirano-san.

On March 13, 2005, I mentioned Enrico’s past, a topic that hadn’t been touched on in the manga at the time. Well, now it has. For one thing, he wasn’t nearly as angelic-looking as I’ve drawn him. He looked a bit like Draco Malfoy.

He was raised by Alex, like the children at the orphanage today — but his parents weren’t dead. Young Enrico, was left lonely and angry, abandoned by parents, without friends. He grew determined to become someone whom people couldn’t look down on. Thus the ambition that led him to lead Section XIII at such a young age.

Storylines in Shine about Enrico’s past have always been told by Enrico, and there’s been some doubt as to how much of what he said was true. Hopefully now you can figure it out: almost none. (Especially not the allusions to each other.)

On June 5, 2005, I posted a color picture of Seras and Pip in which it sort of looked like her eyes were green. Not so. As a human, her eyes are blue. In the anime, they turn red once she’s turned vampire. In the manga, they don’t until she becomes True Undead.