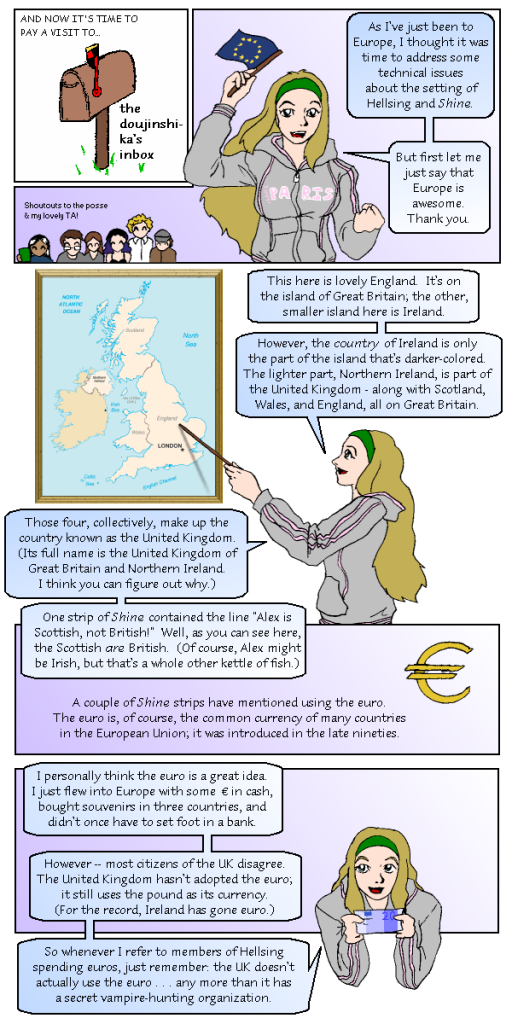 Erin: As I’ve just been to Europe, I thought it was time to address some technical issues about the setting of Hellsing and Shine. But first let me just say that Europe is awesome. Thank you.

This here is lovely England. It’s on the island of Great Britain; the other, smaller island here is Ireland. However, the country of Ireland is only the part of the island that’s darker-colored. The lighter part, Northern Ireland, is part of the United Kingdom — along with Scotland, Wales, and England, all on Great Britain.

One strip of Shine contained the line “Alex is Scottish, not British!” Well, as you can see here, the Scottish are British. (Of course, Alex might be Irish, but that’s a whole other kettle of fish.)

A couple of Shine strips have mentioned using the euro. The euro is, of course, the common currency of many countries in the European Union; it was introduced in the late nineties.

I personally think the euro is a great idea. I just flew into Europe with some € in cas, bought souvenirs in three countries, and didn’t once have to set foot in a bank.

However — most citizens of the UK disagree. The United Kingdom hasn’t adopted the euro; it still uses the pound as its currency. (For the record, Ireland has gone euro.)

So whenever I refer to members of Hellsing spending euros, just remember: the UK doesn’t actually use the euro…any more than it has a secret vampire-hunting organization.