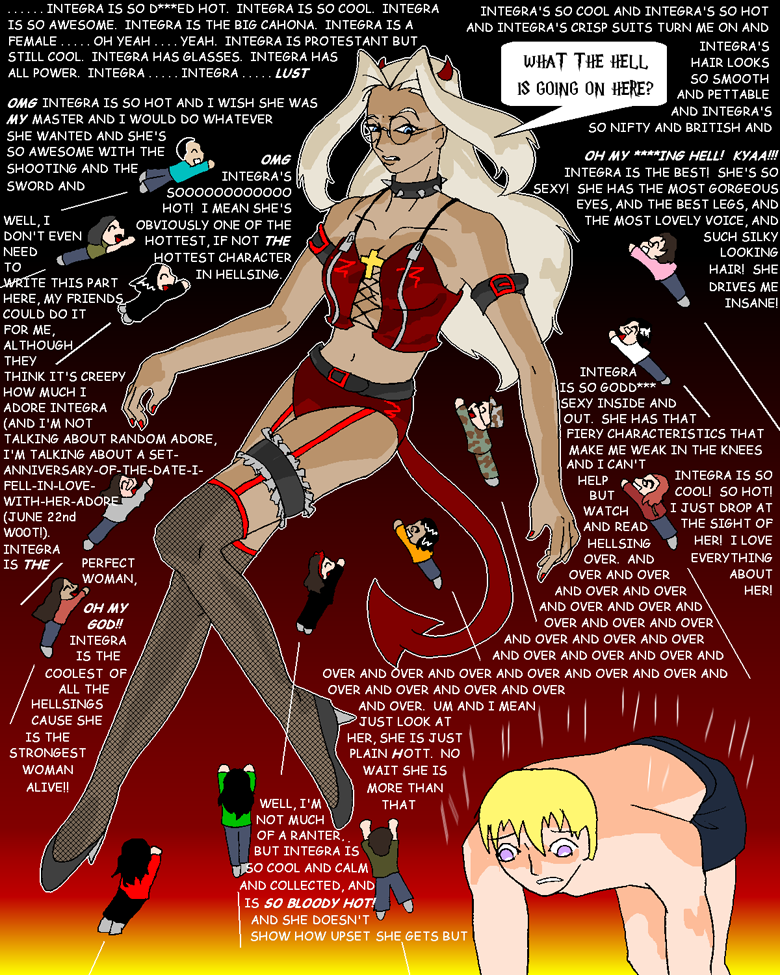 A couple of these fans will be spotlighted later, but here’s the full list:
Down the left: Jang Severem, Benji, Alix, zen, and Eli
Along the bottom: Kenshin, Sarah, and Craig
Im the middle: Zombie, Jessica, and Jason Meyers
Down the right: Otaku of Stuff, Xuanwu, and red

Integra’s shoulder devil: What the Hell is going on here?

Fan 2: OMG Integra is so hot and i wish she was MY master and i would do whatever she wanted and she’s so awesome with the shooting and the sword and

Fan 3: OMG Integra’s soooooooooooo hot! I mean she’s obviously one of the hottest, if not THE hottest character in Hellsing.

Fan 4: well, i don’t even need to write this part here, my friends could do it for me, although, they think its creepy how much i adore Integra (and im not talking about random adore, I’m talking about a set-anniversary-of-the-date-i-fell-in-love-with-her-adore [June 22nd w00t!]. Integra is THE perfect woman,

Fan 5: OH MY GOD!! integra is the coolest of all the hellsings cause she is the stongest woman alive!!

Fan 7: OH MY ****ING HELL! KYAA!!! Integra is the best!! She’s so sexy! She has the most georgous eyes, and the best legs, and the most lovely voice, and such silky looking hair! She drives me insane!

Fan 9: Integra is so cool! So hot! I just drop at the sight of her! I love everything about her!

Fan 10: Well, I’m not much of a ranter, but Integra is so cool and calm and collected, and is SO BLOODY HOT! and she doesn’t show how upset she gets but