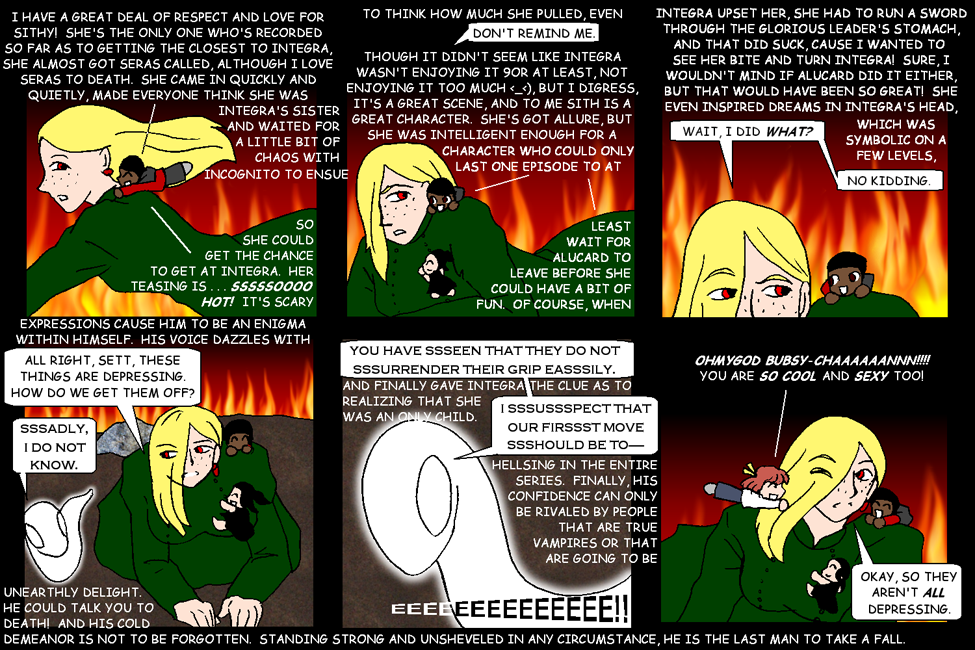 Fanboy: I have a great deal of respect and love for Sithy! She’s the only one whose recorded so far as to getting the closest to Integra, she almost got Seras called, although I love Seras to death. She came in quickly and quietly, made everyone think she was Integra’s sister and waited for a little bit of chaos with Incognito to ensue so she could get the chance to get at Integra. Her teasing is… SSSSSOOOO HOT! It’s scary to think how much she pulled, even

Fanboy: though it didn’t seem like Integra wasn’t enjoying it (Or, atleast, not enjoying it too much <_<), but I digress, it's a great scene, and to me Sith is a great character. She's got allure, but she was intelligent enough for a character who could only last one episode to at least wait for Alucard to leave so she could have a bit of fun. Of course, when Integra upset her, she had to run a sword through the glorious leader's stomach, and that did suck, cause I wanted to see her bite and turn Integra! Sure, I wouldn't! mind if Alucard did it either but that would have been so great! She even inspired dreams in Integra's head, Laura: Wait, I did what?

Fanboy: which was symbolic on a few levels

All right, Sett, these things are depressing. How do we get them off?

Sett: Sssadly, I do not know.

Luke fanboy: expressions cause him to be an enigma within himself. His voice dazzles with unearthly delight. He could talk you to death! And his cold demeanor in not to be forgotten. Standing strong and unsheveled in any circumstance, he is the last man to take a fall.

Laura fanboy: and finally gave Integra the clue as to realizing that she was an only child.

Luke fanboy: Hellsing in the entire series. Finally, his confidence can only be rivaled by people that are true vampires or that are going to be

Fangirl: OHMYGOD BUBSY-CHAAAAAANNN!!!! you are SO COOL and SEXY too!

Laura: Okay, so they aren’t all depressing.