Sean and Lake the Luke fanboys enter, while Kim, as usual, thinks about TV.

Kim (thinking): So…”fangirls” can compel a hot blond guy to make out with his dead brother.

Fanboy: Take a look at Luke. He looks like Alucard with blonde hair and it makes him look soooo handsome! Look at how even

Kim (thinking): (And they don’t need to be female, either; some are more like “fanboys”.)

Fanboy 1: Alucard praised him in Order 6. He’s sooo cool and relaxed about everything until Alucard went all crazy on him and killed him ;-;. I think that Luke would definitely come out

Kim (thinking): Oh, think of the ratings that would bring!

Fanboy 2: Luke is simply the perfect example of a undogging mind set.

Fangirl: holy *bleeping bleep* Jan is the best *bleeping* character known to *bleeping* man!!! he’s so *bleeping* nifty and shmexy and he has those PIERCINGS and hes got that *bleeping* fabulously amazing BEANIE!!! omg!! How could anyone not LOVE JAN???? JAN is the *BLEEPING BLEEP*!! I love the way he SWEARS ALL THE *BLEEPING* TIME!! and hes so shmexy with his

Fangirl: gorgeous little dialated eyes that make him look so cool and he has that awsome eye on his hat!!!! And his name is just so *bleeping* cool cause its Jan VALENTINE! and hes soooo nifty I can’t talk about all the spiffy *bleeping* niftynesss!!!! And I LOVE THAT HE *BLEEPING* SWEARS ALL THE *BLEEPING* TIME!!!!!!!!

Jan: You better not bleepin’ make me snog anyone, bleep.

Fangirl: Who cares about pairings as long as there’s Jan?

Luke (thinking): How many tongue piercings does he have?

You are a sick bleep, bro! A bleeping sick bleep!

Laura: Plausibility makes no difference to them.

Jan: Well, then, you bleeps are bleepin’ sick!!

For once, it’s Luke as well as Jan screaming the obscenities.

Note from The Future: continuity error! Paul Wilson shouldn’t be in the background yet….

Laura: Does that answer your question?

I have lived in this neighborhood for fourteen years and I only just noticed this street sign. I can’t decide if I should hand in my Integra fan license or beg my parents to move here. Maybe I’ll do both. 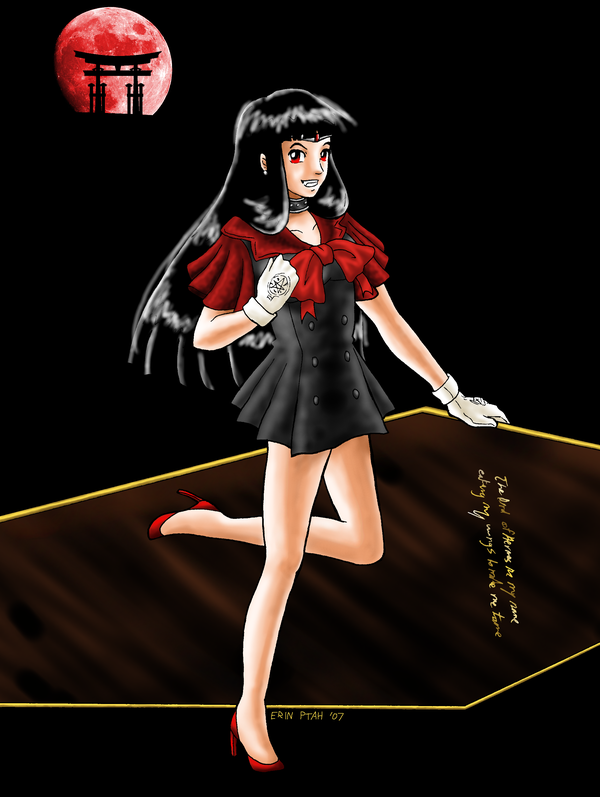 Filler art, found here. This one was commissioned.

Fangirl: and he puts it in a nice little pony tail and thats coolies cool and luke is a total bishounen and luke ROCKS!!!

Laura: How much do you know about these things, Sett?

Laura: Luke! Jan! We need to get these things off, now!!

Reporter-girl Kim. Let it be said that I tend to portray her in Shine as more twisted than I think she actually is, in order to justify her being in Hell. If this comic were entirely serious, I’d put her in Heaven.

Fangirl: It would take a lot to make a cooler hat then that. I want to take it from you because it is so cool. The piercings are also very cool too. I mean I can’t even count how many you have so it must be a lot! I want that many piercings one day

Fangirl: I can run around and be all Jan-like then I it will be so cool. You should get another army of ghouls together and try to TAKE OVER THE WORLD! That would be even cooler!

Kim: Given the size and proportions of those beings, that brings a very disturbing image to mind.

Jan: Who the bleep asked you?

Fangirl: luke is awesome and awesome and luke could kill alucard if he could do that BIg EvIl SCaRy thing alucard does but thats okay that he can’t cus then he’d be all creepy like and luke has long

Kim: And me without my camera…

Enter Katie the Luke fangirl and Sophia the Jan fangirl.

Luke: More of them!

Fangirl: just how he’s always got this grinning, wide-eyed expression on his face. And the piercings! Way cool! he’s just so bleeping awesome-looking!

Fangirl: I’m such a cute little devil but compared to Jan I’m a tick on the side of a road. And that’s why no matter what Jan is the best!

Fangirl: So many shinies on Jan’s handsome face.

Laura: Careful, you two! These things are too good to be true. There must be a catch.

Fangirl: uke is so tall and luke is so pretty and

Jan: What the bleep gives you that idea?

Laura: Well, we are in Hell.