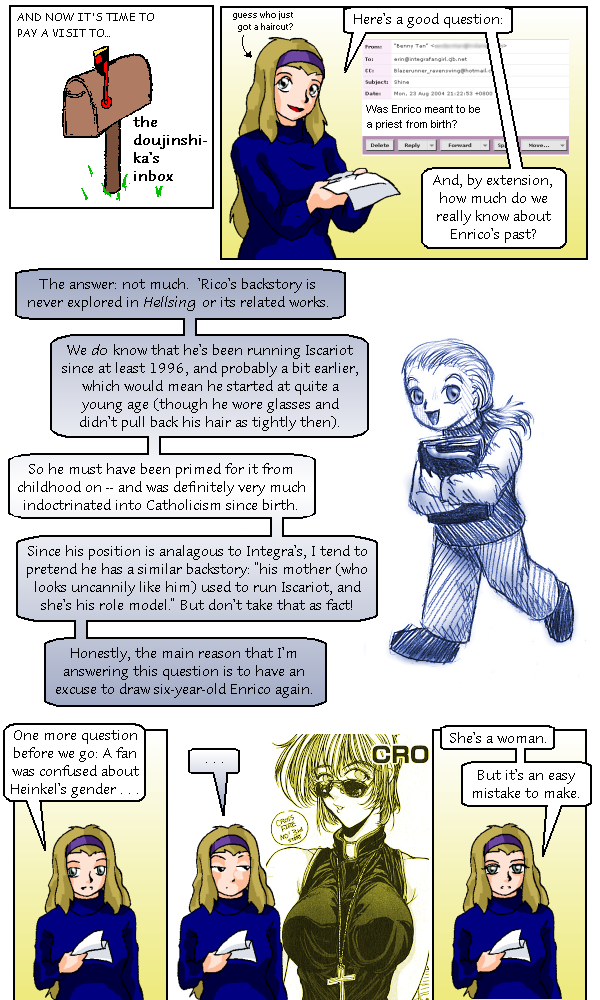 This strip is completely out-of-date: we have much more information on Enrico’s backstory these days, and Heinkel in the Hellsing manga is a different person from Heinkel in the Cross Fire side stories (where this image is taken from).

Email: Was Enrico meant to be a priest from birth?

Erin: And, by extension, how much do we really know about Enrico’s past?

The answer: not much. ‘Rico’s backstory is never explored in Hellsing or its related works. We do know that he’s been running Iscariot since at least 1996, and probably a bit earlier, which would mean he started at quite a young age (though he wore glasses and didn’t pull back his hair as tightly then).

So he must have been primed for it from childhood on — and was definitely very much indoctrinated into Catholicism since birth. Since his position is analogous to Integra’s, I tend to pretend he has a similar backstory: “his mother (who looks uncannily like him) used to run Iscariot, and she’s his role model.” But don’t take that as fact!

Honestly, the main reason that I’m answering this question is to have an excuse to draw six-year-old Enrico again.

One more question before we go. A fan was confused about Heinkel’s gender…

She’s a woman. But it’s an easy mistake to make.