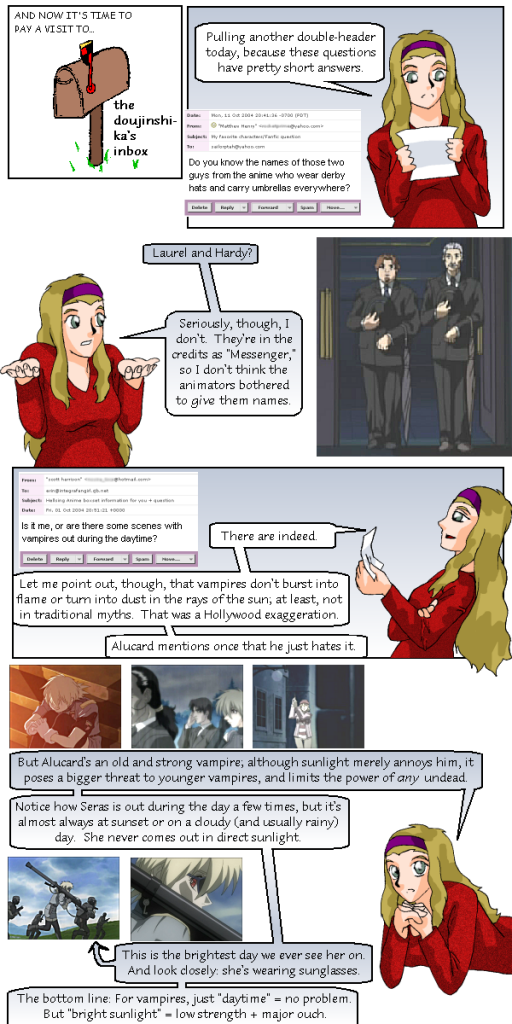 Enrico: Pulling another double-header today, because these questions have pretty short answers.

Email: Do you know the names of those two guys from the anime who wear derby hats and carry umbrellas everywhere?

Erin: Laurel and Hardy? Seriously, though, I don’t. They’re in the credits as “Messenger,” so I don’t think the animators bothered to give them names.

Email: is it me, or are there some scenes with vampires out during the daytime?

Erin: There are indeed. Let me point out, though, that vampires don’t burst into flames or turn into dust in the rays of the sun; at least, not in traditional myths. That was a Hollywood exaggeration. Alucard mentions once that he just hates it.

But Alucard’s an old and strong vampire; although sunlight merely annoys him, it poses a bigger threat to younger vampires, and limits the power of any undead. Notice how Seras is out during the day a few times, but it’s almost always at sunset or on a cloudy (and usually rainy) day. She never comes out in direct sunlight.

This is the brightest day we ever see her on. And look closely: she’s wearing sunglasses.