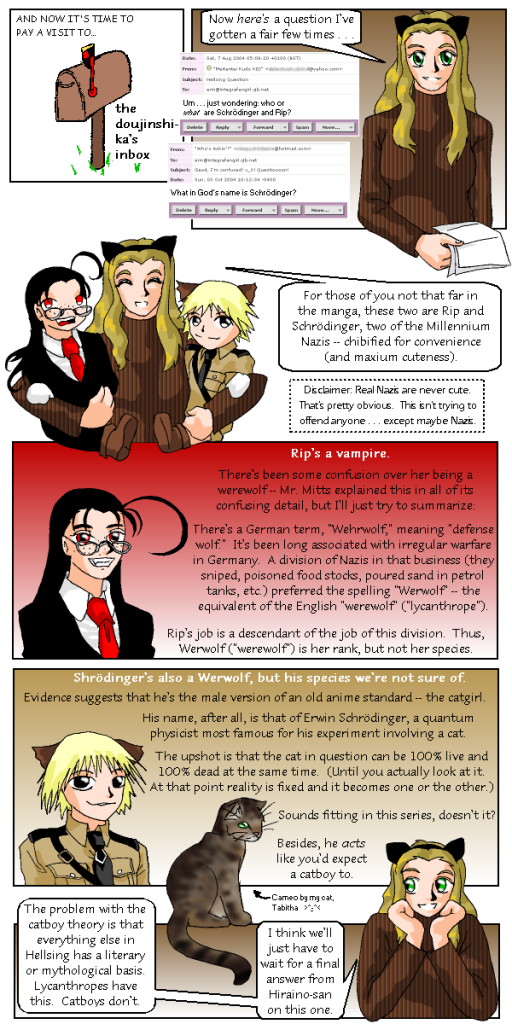 After I posted this, Lorena pointed out that there are werecats in mythology. Jan McNeville discussed a type of cat demon (the aku-sambiki) in Japanese mythology which could take on human form – but retained its ears.

And later, Word Of God came out to say that Schrödinger is a catboy, created by Doc.

Erin: For those of you not that far in the Manga, these two are Rip and Schrödinger, two of the Millennium Nazis – chibified for convenience (and maximum cuteness).

There’s been some confusion over her being a werewolf – Mr. Mitts explained this in all of its confusing detail, but I’ll just try to summarize.

There’s a German term, “Wehrwolf,” meaning “defense wolf.” It’s been long associated with irregular warfare in Germany. A division of Nazis in that business (they sniped, poisoned food stocks, poured sand in petrol tanks, etc.) preferred the spelling “Werwolf” – the equivalent of the English “werewolf” (“lycanthrope”).

Rip’s job is a descendant of the job of this division. Thus, Werwolf (“werewolf”) is her rank, but not her species.

Schrödinger’s also a Werwolf, but his species we’re not sure of.

Evidence suggests that he’s the male version of an old anime standard – the catgirl.

His name, after all, is that of Erwin Schrödinger, a quantum physicist most famous for his experiment involving a cat.

The upshot is that the cat in question can be 100% live and 100% dead at the same time. (Until you actually look at it. At that point reality is fixed and it becomes one or the other.)

Sounds fitting in this series, doesn’t it.

Besides, he acts like you’d expect a catboy to.

[Cameo by my cat, Tabitha.]

Erin: The problem with the catboy theory is that everything else in Hellsing has a literary or mythological basis. Lycanthropes have this. Catboys don’t. I think we’ll just have to wait for a final answer from Hiraino-san on this one.