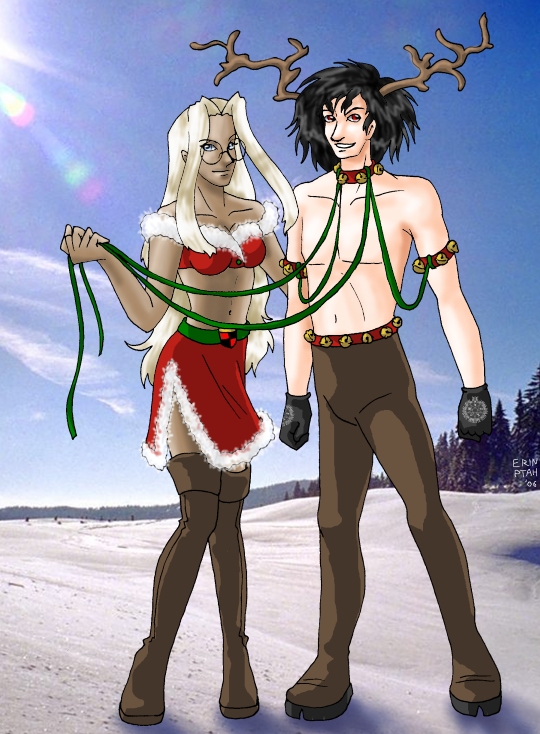 Filler Christmas fanservice (source). Coming up next month: no Saturday breaks and no Sunday specials, just 31 days of straight storyline.

Pip: See ya tomorrow, then.

Erin: After explaining that there was no known explanation for the “green scene” from Order 07, I got a ton of different theories in my inbox. So I thought I’d share them with you – plus, y’know, my opinions, because those are what you really want to hear, right?

Email: Alex’s uniform looks like the uniform of Foreign Legion soldiers; maybe, before he became a priest, he was a mercenary?

Erin: It doesn’t look that much like a Legion uniform. It’s too generic – add the appropriate rest and you’d have the Hellsing grunt uniform. (All this means is that the animators reused that uniform design.)

Email: I took that scene as an illusion Alucard created… showing Alex the easy way out. Alucard wants to demoralize him by showing him his own suicide, hoping he will admit defeat. Or maybe Alucard is just a bit sadistic.

Erin: Alucard doesn’t do a lot of “demoralizing”. He’s more the “incensing” type; a ticked-off Alex is more fun than a broken-spirited one. So although I he is sadistic, I don’t think this is his type of sadism.

Email: [A fan comic I was reading] had Alex being made into a regenerator by a sorta Vatican super-soldier program after having a painful run-in with Alucard and young Walter. Given Alucard’s liking for dramatic entrances… this might be a possible explanation…

Erin: Possible, but not actually in canon. (This scene is a great one for fan comics, as well as pics, because it’s so completely unexplained.)

Email: I think it’s a flashback of Alex running into Alucard during WWII or something… The shadowed-out figure is clearly Alucard… [when the shadow is] sliding over the buildings I saw Alucard’s creepy smile in it.

Erin: Well, what do you know. That is his smile. Between that and the sleeve-ruffles, I’m betting the mystery figure is Alucard. Certainly a vampire.

Email: Alex is using a rifle, not his bayonets; it doesn’t fit him. Maybe he tried to commit suicide, but he’s still alive because he’s a regenerator.

Erin: Again, this is possible speculation. Many people have suspected that this scene’s linked to Alex’s regenerative ability – a fair guess. (Unfortunately, though it has many tantalizing details that look like they ought to be plot-significant, none of them are ever elaborated on. And as I said, there’s nothing like it in the manga.

Email: In the dream-ish sequence, he puts the gun in his mouth, and then, right afterward, he grabs the knife in his mouth and charges at Alucard.

Erin: This email pointed out that perhaps the scene was just a memory, but it gave Alex the idea to hold that one last knife in his mouth when charging (he’s lost both arms by this time, remember). And you know, I think that’s the only thing we can get for certain out of the green scene.

Erin: I do think the end of that scene was inspiration for Alex’s last charge against Alucard, but the rest of its content remains a mystery. I think we can take two lessons from this.

1. Somebody needs to translate Angel Dust so that we have some hard data on Alex’s past.

2. Someone needs to sync this episode to that scene from Monty Python in such a way that armless Alex shouts “I’ll bite your legs off!”

Pip: Speaking of which, you were holding back when you hit me just now, weren’t you?

Pip: Well, thanks! So then…

…will you be wanting this?

Seras: Er… no, you can just take that back upstairs…

Pip: Listen, the thing is… sorry about the “insecurities” crack. I guess I didn’t think of you as a proper person, not being human and all. Which, in retrospect, was kinda stupid.

Sera: You thought I was human when we first met.

Pip: Yeah, then ya slammed me into the floor with one finger, and I rethought my belief in vampires.

Seras: Captain? What are you doing here?

Pip: I brought your lunch. Isn’t this your room?

Seras: It is – I was brushing my teeth.

Pip: If you can’t eat and you don’t drink, why bother brushing your teeth?

Walter: She is supposed to drink it. However, she refuses to do anything which so blatantly exposes her inhumanity.

Walter: Third door on the left. Don’t go any further and don’t turn any corners.

Walter: She’s probably down in her room. I’m just headed down there myself with her nightly blood ration.

Pip: I can take it. She actually drinks this stuff?

Walter: Of course not.

[On second thought, dragging this thing is enough to atone for anything….] 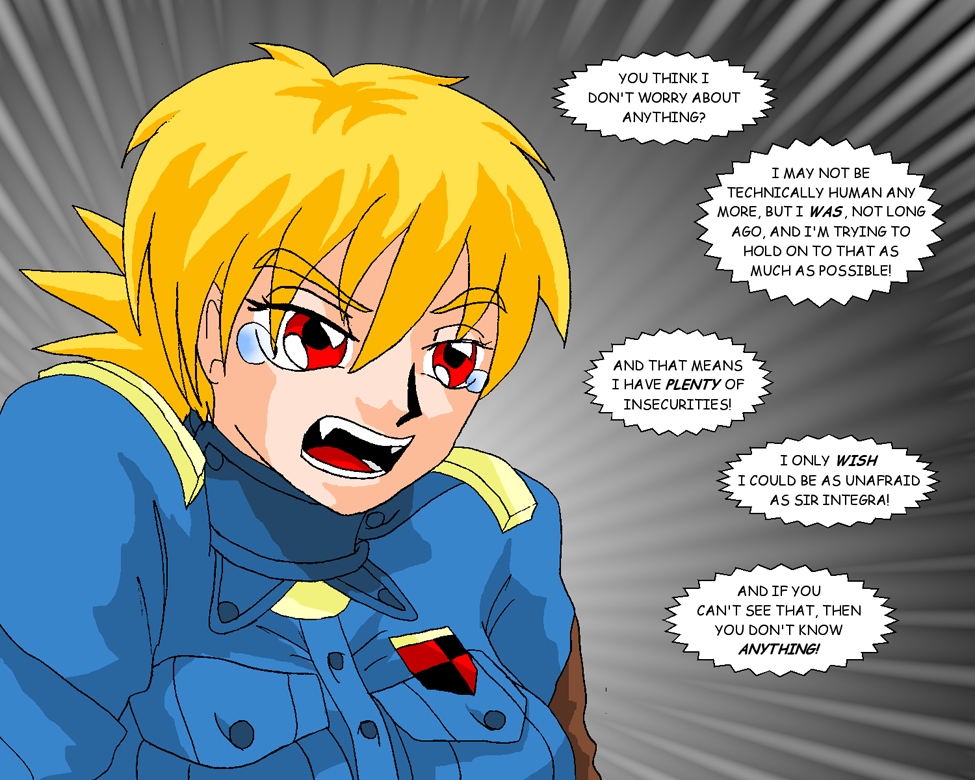 Seras: Do you think I don’t worry about anything?

I may not be technically human any more, but I was, not long ago, and I’m trying to hold on to that as much as possible! And that means I have plenty of insecurities!

I only wish I could be as unafraid as Sir Integra! And if you can’t see that, then you don’t know anything!