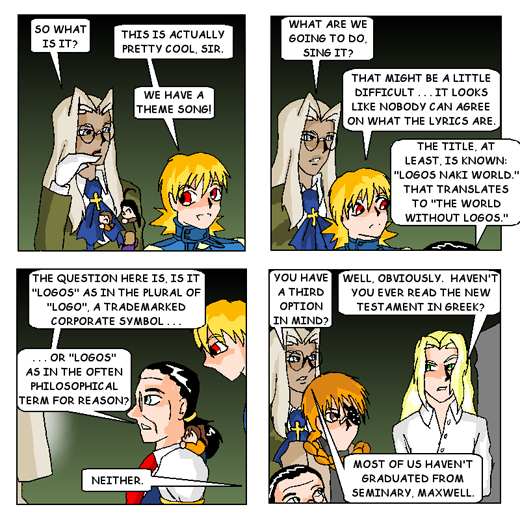 Integra: So what is it?

Seras: This is actually pretty cool, sir. We have a theme song!

Integra: What are we going to do, sing it?

Sera: That might be a little difficult… it looks like nobody can agree on what the lyrics are.

Walter: The title, at least, is known: “Logos Naki World”. That translates to “The World without Logos.”

Integra: You have a third option in mind?

Enrico: Well, obviously. Haven’t you ever read the New Testament in Greek?

Integra: Most of us haven’t graduated from seminary, Maxwell.

Because my Mom studies theology and I assume most of you don’t.

Seminary is like college for priests: it’s where you go to become a priest or minister. (It goes for both Catholics and Protestants.)

Greek – the language in which the New Testament was originally written – is a required course.