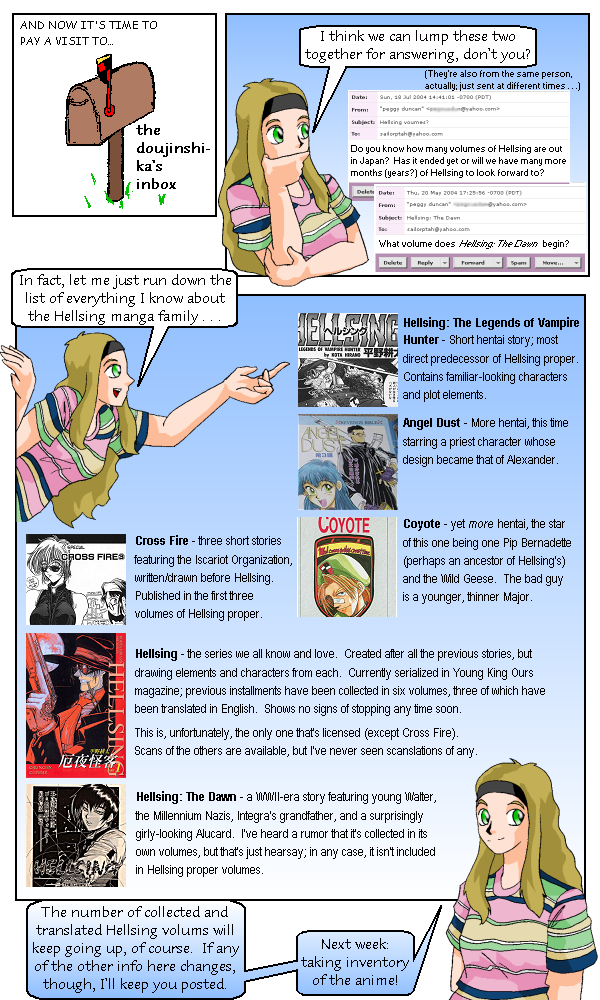 Erin: I think we can lump these two together for answering, don’t you?

Email 1: Do you know how many volumes of Hellsing are out in Japan? Has it ended yet or will we have many more months (years?) of Hellsing to look forward to?

Email 2: What volume does Hellsing: The Dawn begin?

Erin: In fact, let me just run down the list of everything I know about the Hellsing manga family…

Hellsing – the series we all know and love. Created after all the previous stories, but drawing elements and characters from each. Currently serialized in Young King OURs magazine; previous installments have been collected in six volumes, three of which have been translated in English. Shows no signs of stopping any time soon.

This is, unfortunately, the only one that’s licensed (except Cross Fire). Scans of the others are available, but I’ve never seen scanlations of any.

Hellsing: The Dawn – a WWII-era story featuring a young Walter, the Millennium Nazis, Integra’s grandfather, and a surprisingly girly-looking Alucard. I’ve heard a rumor that it’s collected in its own volumes, but that’s just hearsay; in any case, it isn’t included in Hellsing proper volumes.

Erin: The number of collected and translated Hellsing volumes will keep going up, of course. If any of the other info here changes, though, I’ll keep you posted. Next week: taking inventory of the anime!