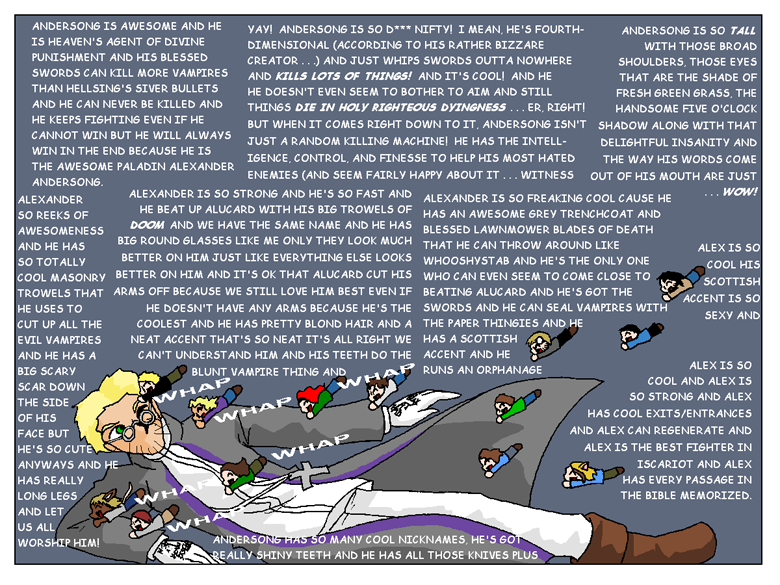 At last, Alex walks straight into his very own fan-mob: from left to right (i.e. if you run a ruler across the screen horizontally, this is the order in which you’ll hit people’s noses), Kris, Alex, Victor, Masquerade, Melanie, Katie, Jess, Isla, Markus, Katrina, Chris, Josh, and Billy!

Fan 1: Andersong is awesome and he is Heaven’s agent of divine punishment and his blessed swords can kill more vampires than Hellsing’s silver bullets and he can never be killed and he keeps fighting even if he cannot win but he will always win in the end because he is the awesome Paladin Alexander Andersong.

Fan 2: Alexander so reeks of awesomeness and he has so totall cool masonry trowels that he uses to cut up all the evil vampires and he has a big scary scar down the side of his face but he’s so cute anyways and he has really long legs and let us all worship him!

Fan 3: YAY! Anderson is so damn nifty! I mean, he’s fourth-dimensional (according to his rather bizzare creator…), and just whips swords outta nowhere and KILLS LOTS OF THINGS! and it’s cool! and he doesn’t even seem to bother to aim and still things DIE IN HOLY RIGHTEOUS DYINGNESS…er, right! But when it comes right down to it, Anderson isn’t just a random killing machine; he has the intelligence, control, and finesse to help his most hated enemies (and seem fairly happy about it… witness

Fan 4: Alexander is so strong and he’s so fast and he beat up Alucard with his big trowels of DOOM and we have the same name and he has big round glasses like me only they look much better on him just like everything else looks better on him and it’s OK that Alucard cut his arms off because we still love him best even if he doesn’t have arms because he’s the coolest and he had pretty blond hair and a neat accent that’s so neat it’s all right we can’t understand him and his teeth do this blunt vampire fang thing and..

Fan 5: Andersong like has so many cool nickname, he he got really shiny teeth and has all those knives plus

Fan 6: Alexander is so freaking cool cause he has an awesome grey trechcoat and blessed lawmower blades of death that he can throw around like whooshystab and he’s the only one who can even seem to come close to beating Alucard and hes got the swords and he can seal vampires with the paper thingies and he has a Scottish accent and he runs an orphanage

Fan 7: Andersong is so TALL with those broad shoulders, those eyes that are the shade of fresh green grass, the handsome 5 o’clock shadow along with that delightful insanity and the way his words come out of his mouth are just… WOW!

Fan 8: Alexander’s so cool his scottish accent’s so sexy and