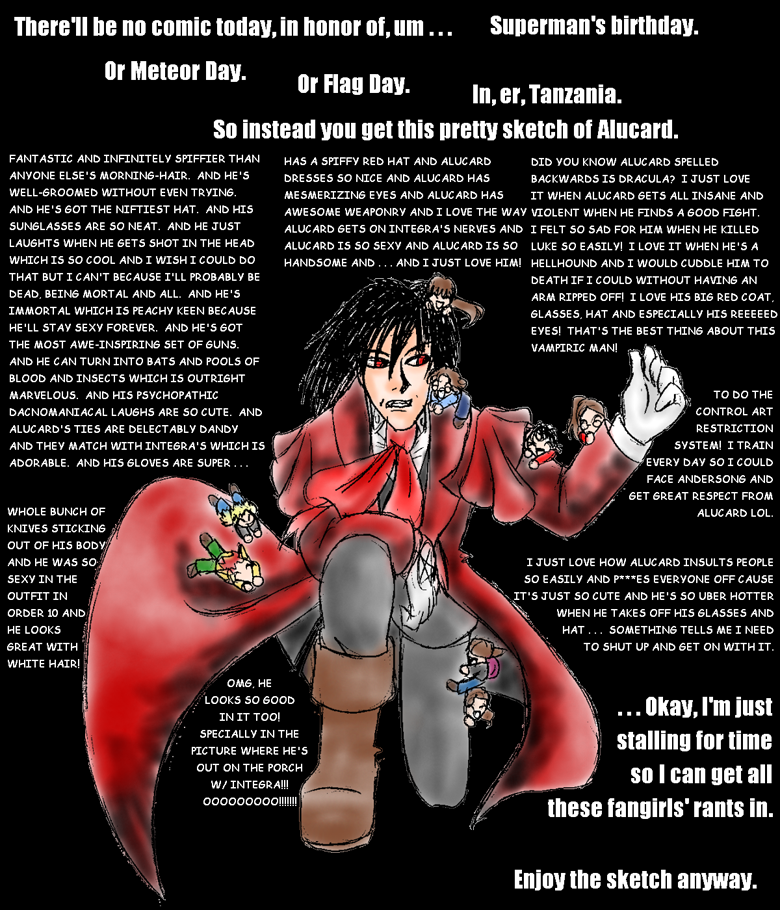 This isn’t a cheap cop-out because the sketch and text arrangement took as long as a comic would have taken anyway. *nods*

There’ll be no comic today, in honor of, um… Superman’s birthday. Or meteor day. Or Flag Day. In, er, Tanzania. So instead you get this pretty sketch of Alucard.

Fan 1: fantastic and infinitely spiffier than anyone else’s morning-hair. And he’s well-groomed without even trying. And he’s got the niftiest hat. And his sunglasses are so neat. And he just laughs when he gets shot in the head which is so cool and I wish I could do that but I can’t because I’ll probably be dead, being mortal and all. And he’s immortal which is peachy keen because he’ll stay sexy forever. And he’s got the most awe-inspiring set of guns. And he can turn into bats and pools of blood and eyes and insects which is outright marvelous. And his psychopathic dacnomaniacal laughs are so cute. And Alucards ties are delectably dandy and they match with Integra’s which is adorable. And his gloves are super…

Fan 3: Did you know Alucard spelled backwards is Dracula? I just love it when Alucard gets all insane and violent when he finds a good fight. I felt so sad for him when he killed Luke so easily! I love it when he’s a hellhound and I would cuddle him to death if I could without having an arm ripped off! ^^ I love his big red coat, glasses, hat and especially his eye!!! I love his reeeeed eyes O_O That’s the best thing about that vampiric man.

Fan 4: whole bunch of knives sticking out of his body and he was so sexy in the outfit in Order 10 and he looks great with white hair!

Fan 6: to do the control art restriction system! I train every day so I could face Andersong and get great respect from Alucard, lol.

Fan 7: I just love how Alucard insults people so easily and ****es everyone off cause it’s just so cute and he’s so uber hotter when he takes off his glasses and hat….Something tells me I need to shut up and get on with it.

…Okay, I’m just stalling for time so I can get all these fangirls’ rants in. Enjoy the sketch anyway. 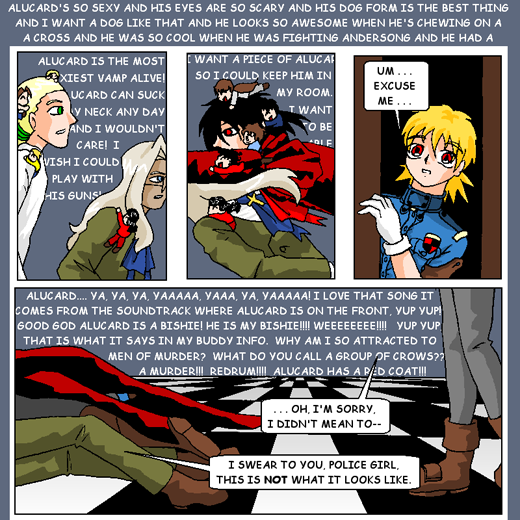 Fan 1: Alucard’s so sexy and his eyes are so scary and his dog form is the best thing and I want a dog like that and he’s looks so awesome when he’s chewing on a cross and he was so cool when he was fighting Andersong and he had a

Fan 2: Alucard is the most sexiest vamp alive. Alucard can suck my neck any day and I wouldn’t care! I wish I could play with his guns!

Fan 3: I want a piece of Alucard so I could keep him in my room! I want to be able

Fan 4: Alucard…. ya, ya, ya, yaaaaa, yaaa, ya, yaaaaa! I love that song it comes from the soundtrack where Alucard is on the front, YUP YUP! Good God Alucard is a bishie! He is my bishie!!!! WEEEEEEEE!!!! yup yup, thas what it says in my buddy info. Why am I so attracted to men of murder? What do u call a group of crows???? A MURDER!!! REDRUM!!!! Alucard has a RED coat!!!

Integra: I swear to you, Police Girl, this is not what it looks like.

On his arm are Lynn and Crystal; on his head are Lan and Jennifer; in the air above him is Zafiel; on his back and cape are Liz, Kage, and Staci; under his cape are Cait and Jessie; and that’s not even the half of them . . .

Fan 1: Love Alucard! He’s the hottest guy in anime! Who cares if he’s dead! It just means he’ll never go away! He’s witty, he’s humorous, you can’t outsmart him, and he can piss off Integra without stopping for a breath (I wanna do that!) He should always be paired with Integra! ALWAYS ALWAYS ALWAYS ALWAYS!

Fan 2: Want to be one of Alucard’s vampire girls, lol. Alucard is my Master! I wish I could join Hellsing so I could hang out with Alucard and kill ghouls!

Fan 3: Alucard is so cool. He’s got the most wonderful voice. And Alucard has beautiful vampire fangs which are nice and shiny and white. And he’s got the best hairdo which is reminiscent of the out-of-bed-look but better looking and cool and

Fan 4: Alucard is the coolest! And he’s a vampire, and he’s got guns, and he’s tough! And no one can beat Alucard! Alucard has fangs, so cool!! 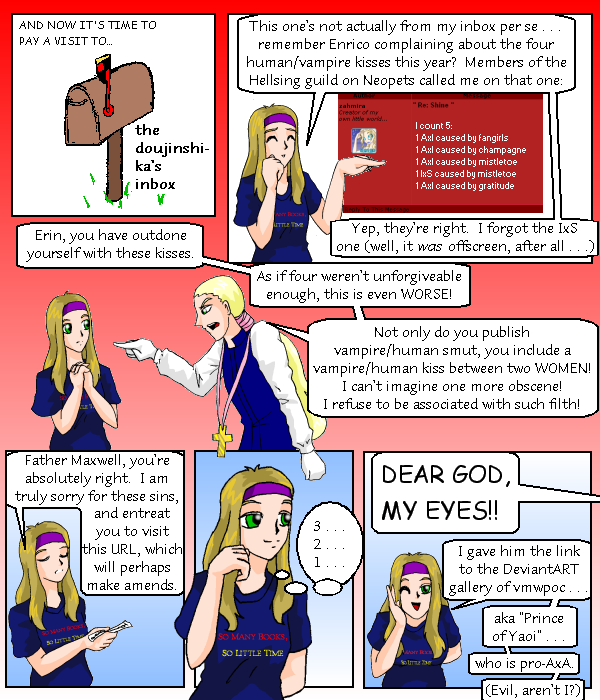 Skye-chan is the first Alucard fangirl, but she clearly won’t be the last…

Alucard: I suppose that means a fangirl for me will show up soon. Yes, I can hear it now.

Alucard: Well, that was painless. Now, what were you about to say?

Same shout and same pose as the last time this happened.

Integra: All right. This has gone on long enough. Alucard!

Alucard: Hello, master. What an interesting situation this is. Would you like me to join in?

Integra: Oh, shut up. And look sharp– the fangirls are back.

Trin the Enrico fangirl has arrived.

Integra fangirl 1: Even when things are down she doesn’t let it get to her, love the color blue her eyes are, love to know how she does that thing with her hair to get it to stay up. She doesn’t let her control slip.

Enrico (thinking): This is getting ridiculous…

Fangirl: He’s my idol ’cause he acts all stupid and five-year-old-ish and he sits around while everybody else does what he wants.

Enrico (thinking): Okay, I don’t like this fangirl either!

Fangirl: I mean, is there a better guy to lead an insane bunch of Catholics?

From left to right, Michelle and Edwina the Integra fangirls!

Integra (thinking): So it does know. It just has odd tastes.

Integra: We need to get out of this room.

Fangirl 1: Integra is just strong and cool and brilliant and and her glasses are nice and her hairstyle is soo original and she’s always in control and…

Fangirl 2: Well what is not to like about her, she is a woman that kicks *** and askes questions later

Integra: … this will happen.

Fangirl 1: Integra’s so mean for refusing the flowers Enrico gave her! See how thoughtful he is? Flowers for everyone! I mean!

Integra: Those ‘thoughtful’ flowers were a distraction while he killed my soldiers.

Fangirl 1: Look at Enrico in the Crossfire series at the back of the Hellsing manga! He’s got a FLUFFY ponytail there!

He’s so versatile and cool like that! Did I mention he wears black and a cross? That is awesome! He’s so hot!

Integra (thinking): Wait… why am I trying to justify myself to a fangirl?

Enrico: Hey, does this one rant?

Fangirl 1: Even when he’s mad he can pull off looking so cute!

From left to right, these newcomers are Kay and Jei the Enrico fangirls. (No affiliation with the Men in Black.)

Fangirl: FEAR THE SEZZEH-NESS THAT IS HIM!!! RAWR!!

Fangirl: Wow Enrico’s so cool! Did you see his pretty hair? It’s all long and soft and shiny like I want my hair to be!

Fangirl: And he’s the leader of Iscariot, how cool can you get? I wish I was the leader of something like that! He has Alexander on his team too! They’re both so cool together…