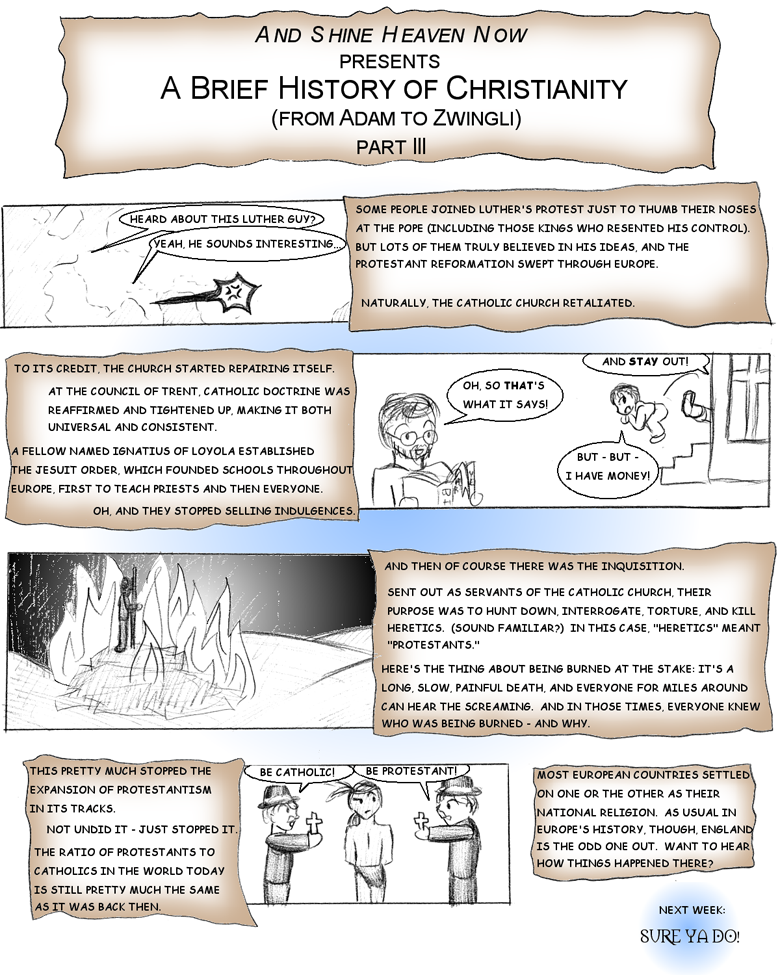 Some people joined Luther’s protest just to thumb their noses at the Pope (including those kings who resented his control). But lots of them truly believed in his ideas, and the Protestant Reformation swept through Europe.

To its credit, the Church started repairing itself.

At the Council of Trent, Catholic doctrine was reaffirmed and tightened up, making it both universal and consistent.

A fellow named Ingatius of Loyola established the Jesuit Order, which founded schools throughout Europe, first to teach priests and then everyone.

Oh, and they stopped selling indulgences.

Man: Oh so that’s what it says!

Priest: And stay out!

And then of course there was the Inquisition!

Sent out as servants of the Catholic Church, their purpose was to hunt down, interrogate, torture, and kill heretics. (Sound familiar?) In this case, “heretics” meant “Protestants”.

Here’s the thing about being burned at the stake: it’s a long, slow, painful death, and everyone for miles around can hear the screams. And in those times, everyone knew who was being burned — and why.

This pretty much stopped the expansion of Protestantism in its tracks.

Not undid it — just stopped it.

The ratio of Protestants to Catholics in the world today is still pretty much the same as it was back then.

Most European countries settled on one or the other as their national religion. As usual in Europe’s history, though, England is the odd one out. Want to hear how things happened there?