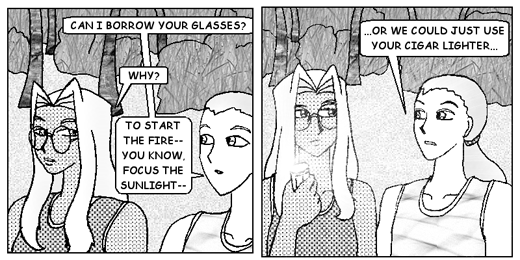 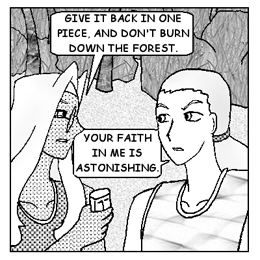 Enrico: Can I borrow your glasses?

Enrico: To start the fire— you know, focus the sunlight—

…or we could just use your cigar lighter…

Integra: Give it back in one piece, and don’t burn down the forest.

Enrico: Your faith in me is astonishing.

Enrico (thinking): “Let’s go separate ways to get wood, so we can change clothes while we’re at it”? She had a change packed?? I just had my swimsuit and tank top… Oh no, what if all she has is that bikini? I won’t be able to think straight!

Enrico, you have to focus! She’ll walk all over you if you let yourself get distracted by her legs… and arms… and ch- —stop it! Jezebel was beautiful. Bathsheba’s beauty led David to disgrace himself in the eyes of God. But Esther was beautiful, and Judith was beautiful, and they’re heroines. Integra isn’t Judith! Focus!

Integra: Ready to start the fire?

Enrico (thinking): So far, so bad…

Mother-of-a-Fangirl’s Definition Corner
Because my mom studies theology, and I assume most of you don’t.

Bathsheba = Beautiful wife of one of King David’s generals. David arranged for her husband to die in battle so that he could marry her.

Esther = Married the king of a foreign land to influence him to stop the government’s persecution of her people, the Jews.

Judith = Killed the general of an invading army by using her beauty to get close to him. (Catholic Bible only.)

Integra: The sooner we get out of here, the less time we have to spend near each other. Therefore…I’m going to go to sleep and try to contact Alucard in a dream.

Integra: It’s the fastest way to get in touch with the rest of the world.

Enrico: Regardless, I will not have my rescue depend on your filthy, heathen monster.

Integra: I can order him not to kill you for the time being…

Enrico: It isn’t that I’m afraid. It’s that your creature is a blasphemy against God! I am not going to rely on such a thing. My fate is in the Lord’s hands; I will not turn it over to that … Devil!

Integra (thinking): Even if I do call Alucard, Maxwell will refuse to be rescued—he’s that stubborn, I’m sure. But I can’t just leave him here—no matter how annoying he is…

Well, Rome wasn’t built in a day—and I doubt a Roman’s mind can be changed in one.

Integra: So we’re building a fire, then? 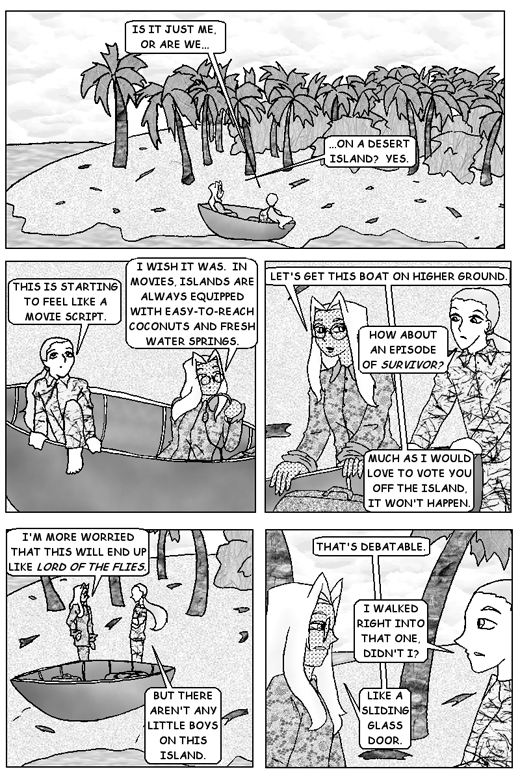 Integra: … on a desert island? Yes.

Enrico: This is starting to feel like a movie script.

Integra: I wish it was. In movies, islands are always equipped with easy-to-reach coconuts and fresh water springs.

Let’s get this boat on higher ground.

Enrico: How about an episode of Survivor?

Integra: Much as I would love to vote you off the island, it won’t happen. I’m more worried that this will end up like Lord of the Flies.

Enrico: But there aren’t any little boys on this island.

Enrico: I walked right into that one, didn’t I?

Integra (thinking): It’s really a pity he isn’t like this all the time. He looks almost harmless while he’s sleeping.

Music: people make mistakes — we took the apple from the snake / and it always is the same, gotta find someone to blame

Enrico(thinking): [ngh…] Is it morning already?

Enrico: Integra, have you been up all night?

Integra: It’s easy not to sleep with Relient K on repeat blasting in your ears.

Music: maybe — maybe it was them

Enrico: Did I say you could borrow that? By the way… We’ve landed. 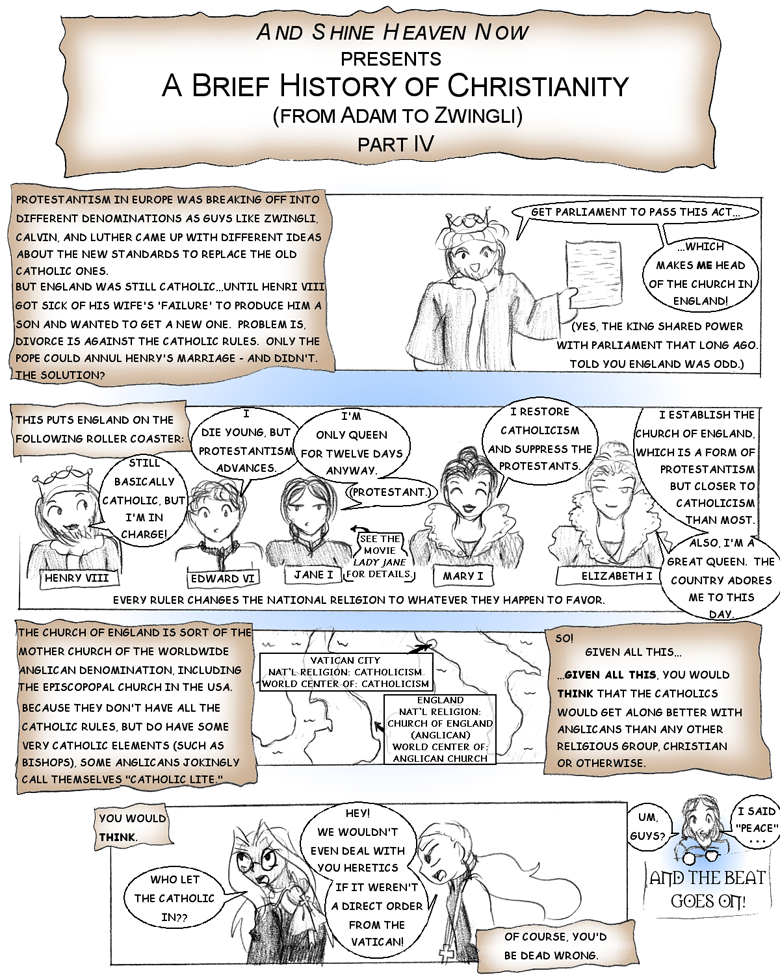 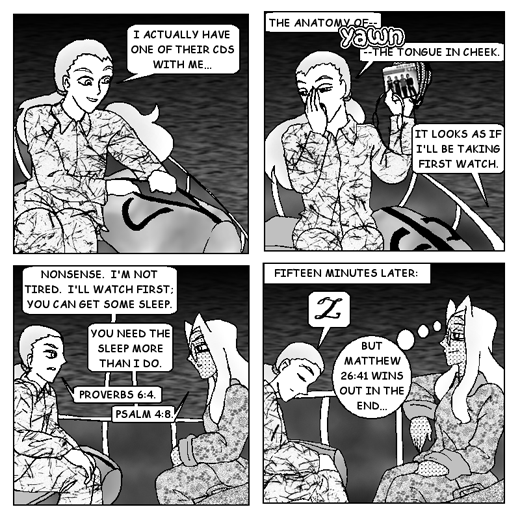 Proverbs 6:4 – “Allow no sleep to your eyes, no slumber to your eyelids.”

Enrico: I actually have one of their CDs with me… The anatomyyawn—the Tongue in Cheek.

Integra: It looks as if I’ll be taking first watch.

Enrico: Nonsense. I’m not tired. I’ll watch first: you can get some sleep.

Integra: You need the sleep more than I do.

Who be this band Relient K?…

(Yes, I know their Christian songs are actually far too Protestant for Enrico’s tastes. Shh.)

Integra: So what you are saying is: maybe…

Enrico: Maybe it was them. Or maybe…

Integra: Maybe it was me. Or maybe…

You listen to Relient K?

Enrico: Wait a minute… if you were trying to “get away from it all”, why did you bring paperwork?

Not to mention suggesting that we take separate lifeboats—knowing full well that it would be safer to stay together—and then rationalize it as being myfault? Did you have your own rescue already planned— —is Hellsing responsible for the crash?

Integra: Of course not! The only reason I don’t suspect Iscariot is that you seem too honestly stupefied by the situation.

Enrico: Or it could have been the organization responsible for the freak chips. You still haven’t taken care of them.

Integra: Meaning you can blame Hellsing either way.

Integra: This vacation was supposed to give me a break from all of my worries. No vampires, no freaks, no paperwork (in theory), no fussy bureaucrats, nothing to deal with. I was meant to be isolated from all the anxieties of the Hellsing organization.

Enrico: I hate to interrupt your little self-pity rant, but…

I was just trying to explain why I didn’t bring a cell phone.