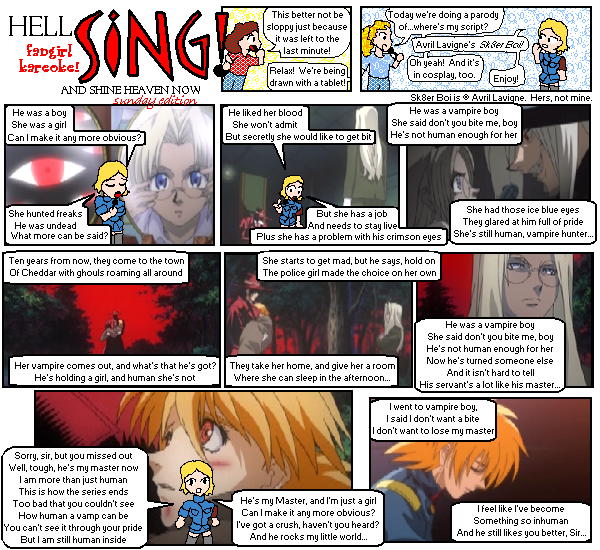 – This better not be sloppy just because it was left to the last minute!

– Relax! We’re being drawn with a tablet!

He was a boy, she was a girl
Can I make it any more obvious?
She hunted freaks, he was undead
What more can be said?

He liked her blood; she won’t admit
But secretly she would like to get bit
But she has a job, and needs to stay live
Plus she has a problem with his crimson eyes

She had those ice blue eyes
They glared at him full of pride
She’s still human, vampire hunter…

Ten years from now, they come to the town
Of Cheddar with ghouls roaming all around
Her vampire comes out, and what’s that he’s got?
He’s holding a girl, and human she’s not

She starts to get mad, but he says hold on
The police girl made the choice on her own
They take her home, and give her a room
Where she can sleep in the afternoon

Sorry, sir, but you missed out
Well, tough, he’s my Master now
I am more than just human
This is how the series ends
Too bad that you couldn’t see
How human a vamp can be
You can’t see it through your pride
But I am still human inside

He’s my Master, and I’m just a girl
Can I make it any more obviious?
I’ve got a crush, haven’t you heard?
And he rocks my little world…

I feel like I’ve become
Something so inhuman
And he still likes you better, Sir…